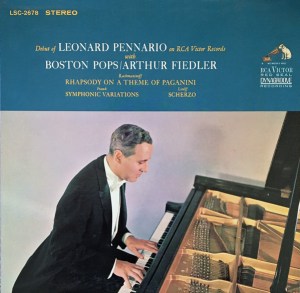 Side two here earned a seriously good sonic grade of A++ for the two shorter works by Franck and Litolff respectively. The top end is extended and the overall sound is quite clear and natural.

Side one is not quite up to the sound heard on side two. We rate it A+. It’s a bit dark and there is some smear on the piano. However, this is a wonderfully well-recorded album, so even at one plus the sound is still quite respectable.

A+ for the Rachmaninoff

A++ for these two works:

Rhapsody on a Theme of Paganini

After a brief introduction, the first variation is played before the theme. Paganini’s theme is stated on strings with the piano picking out salient notes, after the first variation. Rachmaninoff likely got the idea of having a variation before the theme from the finale of Beethoven’s Eroica symphony. Variations II to VI recombine elements of the theme. The pauses and rhetorical flourishes for the piano in variation VII herald a change of tempo and tone. The piano next gravely intones the Dies Irae, the “day of wrath” plainchant from the medieval Mass of the Dead, while the orchestra accompanies with a slower version of the opening motif of the Paganini theme. The piece is one of several by Rachmaninoff to quote the Dies Irae plainchant melody.

Inversion of the melody

The slow eighteenth variation is by far the most well-known, and it is often included on classical music compilations without the rest of the work. It is based on an inversion of the melody of Paganini’s theme. In other words, the A minor Paganini theme is played “upside down” in D flat major. Rachmaninoff himself recognized the appeal of this variation, saying “This one, is for my agent.”

Rhapsody on a Theme of Paganini (Rachmaninoff)