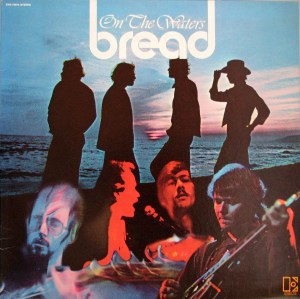 Hot Stampers have finally been discovered for the most consistent and BEST SOUNDING of the Bread albums (not counting the Best of Bread compilation, one of our long time favorites here at Better Records, but a compilation nevertheless). This is the record that put their heavily Beatles-inflected Pure Pop on the map, and at the top of the charts with their Number One hit single Make It With You.

We used to think that only the Best of Bread album could get that song to sound as luscious and Tubey Magical as it does when we hear it in our heads, but it seems we were wrong — it sounds positively amazing on the best copies of On The Waters. To hear the vocal harmonies that these guys produced is to be reminded of singers of the caliber of the Everly Brothers or The Beatles.

We heard a lot of copies that were smeary and too smooth; we heard none that were especially edgy and bright (the later reissues tended not to make the cutoff for the shootout, they may be that way), so the trick is to find a copy with the resolving power and transparency lacking in most copies in order to cut through the thickness. Look for breath on the vocals (reverb too!) and extended guitar harmonics; if those two qualities are strongly evident you can’t be too far off. More presence, bigger bass, more size, energy and space: these will help take you to the next level.

Notice how prominent, big and clear the bass guitar is on many of these songs, especially Make It With You on side one and I Want You With Me on side two. This is not a sound we hear nearly enough! During the shootout we were lovin’ it. The Legacy Focus in our reference system has three twelve inch woofers per channel. They do a lovely job with this kind of big bottom end recording, the kind of recording for which Botnick and The Doors (and Love too, let’s not forget them) are justly famous. Where is that sound today? We miss it.

A++, big, clear, jumpin’ out of the speakers with life and energy, and an actual extended top end, this copy really rocked! There was a slight hardness to the vocals and the strings (strings are always a good test for hardness or shrillness on a pop song), but other than that the vocals were as rich and breathy as the best.

A++, with a very different problem than that of side one. This copy is so rich, Tubey Magical, and with such big bass and overall size that were it not for a touch of smear it would easily have earned our top Three Plus grade. It’s the way this music should sound, the way it works its Pop Magic. With better transients it would be perfection. No doubt during playback of the final mix in the studio it did have those transients and it was perfection.

Bread broke big with their second album, thanks to David Gates’ sentimental soft pop classic, “Make It With You” — the song that set the standard for sensitive mellow pop ballads for the ’70s and for years to come. Its pull is strong, but it’s a bit misleading, since the group hardly just turns out a series of these lovely, luxurious pop tunes throughout the record. In fact, with the considerable assistance of Robb Royer and James Griffin, the group actually rocks it harder than Crosby Stills & Nash (if not CSNY, true enough), and they continue to show that the diversity and range of material they demonstrated on their debut was no fluke. If anything, “Make It With You” doesn’t set the pace for the rest of the record, since even the softer moments, such as “Look What You’ve Done,” isn’t as lushly mellow as that — there is more coloring through the guitars, and the songwriting has more edge and melody than that. Of course, this is hardly a hard rock record, but it’s a first-class Californian pop record, one that is as blissful as a sunset when it lays back, and as incandescent as a day at the beach when the tempo is sprightly.