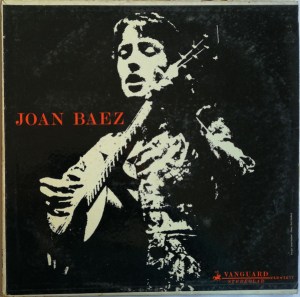 This former member of the TAS list is the kind of recording that has everything going for it: Golden Age equipment in a live acoustic with a simple arrangement for voice and guitar (or two).

The voice and the material come together nicely. If I were to recommend only one Joan Baez record it would surely have to be this one. Diamonds and Rust is a nice pop album but I think if you go back and play it today you will find that it sounds somewhat dated. Good folk tunes like the ones found on this album, however, never seem to go out of style.

The record sounds like a live demo session because that is exactly what it is:

In 1983 Baez described the making of the album to Rolling Stone’s Kurt Loder:”…It took four days. We recorded it in the ballroom of some hotel in New York, way up by the river. We could use the room every day except Tuesday, because they played Bingo there on Tuesdays. It was just me on this filthy rug. There were two microphones, one for the voice and one for the guitar. I just did my set. It was probably all I knew how to do at that point. I did ‘Mary Hamilton’ once and that was it…That’s the way we made ’em in the old days. As long as a dog didn’t run through the room or something, you had it…”

The purity and complete freedom from distortion allow the listener to imagine himself, to borrow a phrase, in the Living Presence of the performer. With a record this good it takes no effort whatsoever to suspend disbelief and imagine Joan and her guitar directly in front of you, a command performance if you will.

This record is the very definition of Tubey Magic. No recordings will ever be made that sound like this again, and no CD will ever capture what is in the grooves of this record. There is a CD of this album, and youtube videos of the music too, but those of us with a good turntable could care less.

What We’re Listening For on Joan Baez’s Debut

Keys to the Best Sounding Pressings

Baez’s first album, made up primarily of traditional songs (including a startling version of “House of the Rising Sun”), was beguiling enough to woo even conservative-leaning listeners. Accompanied by the Weavers’ Fred Hellerman and a pair of session singers, Baez gives a fine account of the most reserved and least confrontational aspects of the folk revival, presenting a brace of traditional songs (most notably “East Virginia” and “Mary Hamilton”) with an urgency and sincerity that makes the listener feel as though they were being sung for the first time, and opening with a song that was to become her signature piece for many years, “Silver Dagger.”