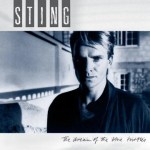 Most copies we played had that edgy, harsh, digital ’80s sound, the kind that makes us wince. Other copies lacked energy, others were just too bright, and most of them were full of grit and grain. When the brass sounds too thin, as it did on a majority of our copies, the sound is positively painful.

It’s another one of those albums that sounds like it was designed to “pop” out of your speakers. You can really picture this one playing at all the audio shows back in the day. They were probably playing a CD, and, for all we know, it may have even sounded better than the average vinyl pressing.

After disbanding the Police at the peak of their popularity in 1984, Sting quickly established himself as a viable solo artist, one obsessed with expanding the boundaries of pop music. Sting incorporated heavy elements of jazz, classical, and worldbeat into his music, writing lyrics that were literate and self-consciously meaningful… he proves that he’s subtler and craftier than his peers.