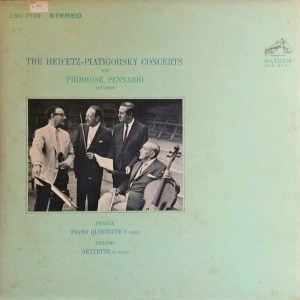 A stellar reading of the Franck from this formidable group.

Side one of this Shaded Dog is excellent: rich, smooth and sweet.

The piano is exceptionally well-recorded, with real weight.

The Brahms is very good if you can reverse your polarity.

As a rule we prefer our Chamber Music recordings to include a piano; it helps to ground the sound and tends to result in better recordings, certainly less screechy ones than those that only employ stringed instruments.

Dry sound. Many of the RCA chamber recordings have little to no ambience, space or richness. The Heifetz-Piatigorsky Concerts Box Set (on 3 Soria LPs), from which this disc is taken, tends to have most of its six sides that way. Some copies of it are in reversed polarity as well, which only adds to the screechiness of the sound.

In fact, this very side two is reversed. It has no real extension or space up top when played back normally.

Once your reverse the polarity the top opens up, the harmonics of the strings are clear, and there’s space for the instruments to occupy as they increase in energy and level.

Without that space they hit a wall, a ceiling if you like, and the result is harsh, constricted sound.

Side One – Piano Quintet

Full, rich, spacious, with a wonderful piano sound and no dryness. Few copies will be able to compete with sound this good. A bit more top end extension and this side one would have been White Hot.

Nearly as good as the wonderful side opposite it. Could use more clarity and transparency, but it’s very musical and enjoyable as it is.

The Piano Quintet, one of the earliest masterpieces of Franck, marked his return to chamber music after more than 35 years. The work was dedicated to Saint-Saëns who, although he played the piano part in the premiere, so strongly disapproved of the musical language of the composer that he rejected the dedication.

The first movement opens with a dramatic introduction, Molto moderato quasi lento, by the bowed strings. The piano replies in a gentle manner. The strings restate their opening. The piano turns even more gentle. The dialogue continues along similar lines until the piano suddenly launches into the Allegro. The second subject is characterized by a wistful inflection to minor. The development reaches a stormy climax. A passage mirrors the introduction. The reprise is very intense, but it concludes fading away.

The second movement, Lento, con molto sentimento, is also in sonata form. It opens with a motive with a falling figure on the first violin, with a background of repeated chords of the piano. The atmosphere gradually turns more tragic. Then, a gentle melody in the lower strings is accompanied by piano in the high register. In the central section, the piano brings back the second subject of the opening Allegro. The reprise is again highly dramatic.

The finale, Allegro non troppo ma con fuoco, is characterized by a relentless rhythmic drive. It opens with a repeated soft motive in the strings from which the first subject emerges. The second subject begins with a piano theme accompanied by the strings. The agitation continues throughout. Near the ending, the second subject of the Allegro reappears. But the rhythmic urgency resumes and brings the work to an intense conclusion.

César Franck is an important composer from the latter half of the nineteenth century, particularly in the realms of symphonic, chamber, organ and piano music. His stage works were uniformly unsuccessful, though his choral compositions fared somewhat better. Born in Liège (in the French region which in 1830 became part of a new state, Belgium), on December 10, 1822, he led a group of young composers, among them d’Indy, Duparc, and Dukas, who found much to admire in his highly individual post-Romantic style, with its rich, innovative harmonies, sometimes terse melodies, and skilled contrapuntal writing. This group, sometimes known as “la bande à Franck,” steered French composition toward symphonic and chamber music, finally breaking the stranglehold of the more conservative opera over French music.

Franck was a keyboard player of extraordinary ability who had a short stint as a touring piano virtuoso before moving to Paris and throwing himself into musical studies. In addition, he was an organist at several major churches during his career, and his skills on the organ accounted in great part for his compositional interest in that instrument; his organ compositions stand at the apex of the Romantic organ repertoire. Franck was a man of strong religious convictions throughout his life, which often motivated him to compose works based on biblical texts or on other church sources. For much of his life he was organist at the Paris churches of St.-Jean-St. François and then Ste.-Clothilde, and in 1872 he became a professor at the Paris Conservatoire.

Individual and instantly recognizable though his music was, it owes a debt to Liszt and Wagner, especially to the latter’s Tristan und Isolde and several other late works. He tended to use rather quick modulations, another inheritance from Wagner, and shifting harmonies. There is a Germanic ponderousness in some of his compositions; consider, for example, the opening of the Symphony in D minor of 1888, probably Franck’s most famous composition. In this work, one hears a mixture of paradoxical elements so typical of the composer: for example, moments of peace and serenity barely conceal an undercurrent of disquiet. In this symphony, Franck, adapts the Lisztian-Wagnerian predilection toward cyclical structure and melodic motto to an abstract symphonic form. Another characteristic of Franck’s music is extended homophonic writing, as exemplified in his choral symphonic poem Psyché.

Franck died in Paris on November 8, 1890. By the turn of the century he had become the leading figure associated with the “Old School” in France, while Debussy came to represent the “progressive” forces.