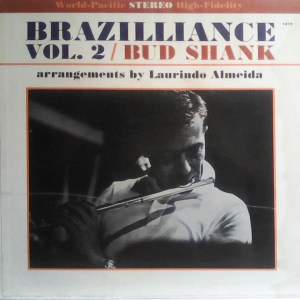 This World Pacific pressing has the kind of Tubey Magical Midrange that modern records rarely even BEGIN to reproduce. Folks, that sound is gone and it sure isn’t showing signs of coming back. If you love hearing INTO a recording, actually being able to “see” the performers, and feeling as if you are sitting in the studio with the musicians, this is the record for you. It’s what vintage all analog recordings are known for — this sound.

What the best sides of Brazilliance, Vol.2 from 1962 have to offer is not hard to hear:

What We’re Listening For on Brazilliance, Vol. 2

Five years after guitarist Laurindo Almeida and altoist Bud Shank had a regular quartet, documented what could be considered the first bossa nova recordings (Brazilliance, Vol. 1), and then disbanded, they had a reunion…. once again combining Brazilian rhythms and folk melodies with cool bop improvising.

This time around, the arrangements are not as restrictive, Shank’s solos are longer, and the jazz content sometimes overrides the Brazilian elements. The music is still quite enjoyable (the very complementary Almeida and Shank would join together again in the 1970s as the L.A. Four) if not as historical; both volumes are highly recommended.

This album strives to develop an amalgamation of Brazilian music and jazz. In building compositions around his native music, Laurindo finds the improvisatory freedom of jazz blends readily with written Brazilian themes. The two idioms dovetail easily: both are in even tempos, both swing. These compositions approximate what they do in Brazil: a sort of natural fusion of folk and classical elements whereby the folk music absorbs a “nice” influence from classical music. The sambas in this album, for example, attain a higher level than do those at carnival dances in Brazil because they have more organization and abundancy of ideas to be developed.

As the Brazilian folk flavor merges with American jazz, the two musical genres are pointed up in new relief, imbued with new textures and concepts of creativity; each affirms the vitality of the other. “I’m a jazz musician,” emphasizes Bud, “and Laurindo is a Brazilian musician and we each play what we are. I’m trying to cook as much as I can in whatever I do.”