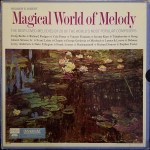 Amazing in every way! The top end of this record is clear, clean and correct. No other copy sounded like this one on the first side. When you hear all the percussion instruments — the tambourines, triangles, wood blocks and what-have-you — you know instantly that they sound RIGHT.

This is Front Row Center sound for those whose systems can reproduce it!

The Triple Plus sound makes this THE Gaite Parisienne to Own.

If you have a hot copy of LSC 1817 consider yourself very fortunate. If your copy of LSC 1817 has never thrilled you, then this pressing will beat the pants off it, as it is pretty darn THRILLING. Even if you do have a great 1817 I would still put this up against it and expect it to win the shootout.

It’s clear, clean and above all, TRANSPARENT. This is a claim no modern remastered record, in our opinion, can make. The energy is spectacular on this side. Not only that, but listen to the bite of the brass — that’s some high-rez sound!

If you can reverse your polarity. If you can’t the sound will be aggressive and vague in equal measure.

A++ sound, in reversed polarity again. Rich and natural as befits the music.

Note how vague the violin solo is with the polarity wrong. As soon as it is switched to be “correct” a solid, real, natural violin pops into view.

That’s how you know your polarity is correct, folks!

Jacques Offenbach died in 1880, yet it is his name that is attached to this ballet that first appeared in 1938. While the tunes in Gaîté Parisienne are his, much of the orchestration, as well as the arrangement of the numbers, was done by Manuel Rosenthal.

The story concerns the seedy patrons of a Paris bistro called Tortoni’s Restaurant, an actual business establishment. There are many amorous adventures in the ballet, with the story centering on two men: a baron who chases after a young woman selling gloves, and a Peruvian who pursues a relationship with a flower girl. It is all quite mischievous fun, colorfully packaged and brilliantly suited by the Offenbach/Rosenthal score. The premiere on April 5, 1938, at the Théâtre de Monte Carlo, was a great success and the music has been in the standard repertory ever since, often presented in “pops” concerts.

Much of the music in Gaîté Parisienne, of course, was already familiar when it was first presented, which may have aided its success. The popular “Can-Can,” for example, is taken from Offenbach’s operetta, Orpheus in the Underworld (1858; rev. 1874). The familiar Barcarolle, which closes the ballet, comes from the Tales of Hoffman (1881), his last operetta.

There is much other attractive music in Gaîté Parisienne, all of it in a light vein. There are two colorful polkas, five waltzes, a Ländler, and many other dances, most frothy and joyous, all quite tuneful and direct. In sum, this is unpretentious, well-crafted music, and while it will not appeal to those exclusively interested in serious listening, it is undeniably masterful within its genre.

Les Sylphides is a short, non-narrative ballet blanc. Its original choreography was by Michel Fokine, with music by Frédéric Chopin orchestrated by Alexander Glazunov. Glazunov had already set some of the music in 1892 as a purely orchestral suite, under the title Chopiniana, Op. 46. In that form it was introduced to the public in December 1893, conducted by Nikolai Rimsky-Korsakov.

The ballet, described as a “romantic reverie”, is frequently cited as the first ballet to be simply about mood and dance. Les Sylphides has no plot, but instead consists of several white-clad sylphs dancing in the moonlight with the “poet” or “young man” dressed in white tights and a black tunic.