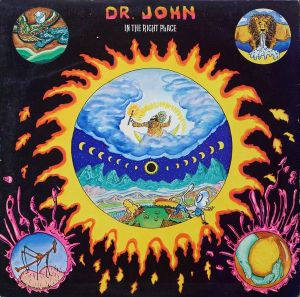 Punchy drums, solid bass, smooth vocals, extended highs — this album was produced, recorded and mastered by superbly talented individuals who deserve a lot of credit for the work they have done here.

If you like Little Feat this album should be right up your alley. And if you like this album and don’t know little feat, the link on the left will take you to their music. They’re one of the all time great bands of the ’70s (and still going as far as I know).

This original Yellow Label Atco pressing has the kind of Tubey Magical Midrange that modern records cannot even BEGIN to reproduce. Folks, that sound is gone and it sure isn’t showing signs of coming back. If you love hearing INTO a recording, actually being able to “see” the performers, and feeling as if you are sitting in the studio with the band, this is the record for you. It’s what vintage all analog recordings are known for — this sound.

The sound is BIG and BOLD with a punchy bottom end, but like almost every copy out there it has a bit of grit and grain at times — Same Old Same Old on side one is never going to be smooth and sweet, for example.

The Big, Rich Sound of In The Right Place

What the best sides of this Bayou Funk album from 1973 have to offer is not hard to hear:

The Players (and their nicknames)

Dr. John finally struck paydirt here and was certainly In the Right Place. With the hit single “Right Place Wrong Time” bounding up the charts, this fine collection saw many unaware listeners being initiated into New Orleans-style rock. Also including Allen Toussaint’s “Life,” and a funky little number entitled “Traveling Mood,” which shows off the good doctor’s fine piano styling, and with able help from the Meters as backup group, In the Right Place is still a fine collection to own.