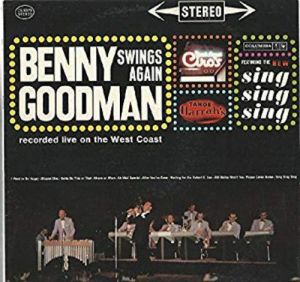 This vintage Columbia 6 Eye Stereo pressing has the kind of Tubey Magical Midrange that modern records rarely even BEGIN to reproduce. Folks, that sound is gone and it sure isn’t showing signs of coming back. If you love hearing INTO a recording, actually being able to “see” the performers, and feeling as if you are sitting at Ciro’s with the band, this is the record for you. It’s what vintage all analog recordings are known for — this sound.

What the best sides of …Swings Again from 1960 have to offer is not hard to hear:

A Big Jazz Group Needs This Kind of Space

What We’re Listening For on …Swings Again

This live session from Benny Goodman’s 1960 tentet, despite some throwaway vocals by Maria Mashall, finds The King of Swing catching fire a few times, particularly on an extended version of “After You’ve Gone.” With a particularly strong lineup that includes vibraphonist Red Norvo, tenorman Flip Phillipsand trumpeter Jack Sheldon, this out-of-print LP features Benny Goodman at his best (even if the swing era had supposedly ended 15 years earlier).