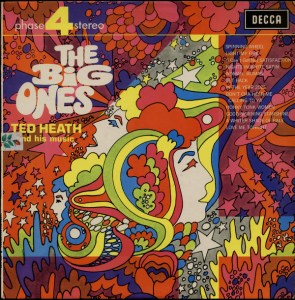 This is a WONDERFUL SOUNDING, VERY LIVELY big band record, putatively under the direction of Ted Heath. I suspect he had nothing to do with this album though. What it sounds like is top studio musicians playing fun, clever arrangements of the pop songs that were current at the time. It reminds me of what Lincoln Mayorga and his buddies were doing direct-to-disc over at Sheffield. (The sound is as almost as good too.)

An album like this lives or dies by the quality of its musical ideas, since we know these songs so well. To me the album works because these musicians are having a ball with this pop fluff. I’m a big fan of what Lincoln Mayorga was doing on those first three Sheffield records, and if you are too you should get a kick out of this album.

Great drumming by the way.

“The posthumously released The Big Ones captures eccentric British bandleader Ted Heath at the peak of his alchemical powers, transforming the biggest charts hits of the flower-power era to create singularly outré space-age jazz far freakier than anything produced under the influence of psychedelics… Even the songs you never wanted to hear again in any format — “Spinning Wheel” and “In the Year 2525″ — seem fresh and exciting all over again, albeit completely unfamiliar in Heath’s expert hands.” – AMG

The record plays Mint Minus. The fold-open cover is in IMMACULATE condition and rates a 9+ out of 10.