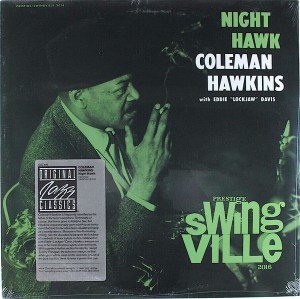 For us audiophiles both the sound and the music here are wonderful. If you’re looking to demonstrate just how good an 1961 All Tube Analog recording can be, this killer copy will do the trick.

This IS the sound of Tubey Magic. No recordings will ever be made like this again, and no CD will ever capture what is in the grooves of this record. There is of course a CD of this album, but those of us who possess a working turntable and a good collection of vintage vinyl couldn’t care less.

Beating the Originals at Their Own Game

The best copies of a certain small, select group of reissues sound like the vintage jazz albums they are attempting to emulate, and sometimes they even beat the originals at their own Tubey Magical game. They can be every bit as rich, sweet and spacious as their earlier-pressed brethren in our experience.

In the case of Night Hawk we simply have never seen an original stereo copy clean enough to buy, so we have no actual, physical reference for what an original would sound like.

That said, having critically auditioned literally thousands of vintage jazz records over the course of the last few decades, including hundreds recorded by Rudy Van Gelder like this one, we’re pretty confidant we know what the good ones are supposed to sound like.

And they sound just like the best copies of the very pressing we are offering here.

What the best sides of this Classic Jazz Album from 1961 have to offer is clear for all to hear:

The best copies are rich and tubey; many pressings were thin and modern sounding, some were opaque and recessed, and they would lose a lot of points for those shortcomings. We want our Hot Stamper pressings to sound like something RVG recorded in 1961, and the best copies give you that sound, without the surface noise and groove damage the originals doubtless have to offer.

Copies with rich lower mids did the best in our shootout, assuming they weren’t veiled or smeary of course. So many things can go wrong on a record! We know, we’ve heard them all, by the thousands in fact.

Smear is common to most records, and this is no exception. The copies that tend to do the best in a shootout will have the least (or none), yet are full-bodied, tubey and rich.

Night Hawk
There Is No Greater Love

Hawkins was one of the main inspirations of his fellow tenor Eddie “Lockjaw” Davis, so it was logical that they would one day meet up in the recording studio. This record has many fine moments from these two highly competitive jazzmen, particularly the lengthy title cut and a heated tradeoff on “In a Mellow Tone,” on which Davis goes higher but Hawkins wins on ideas.