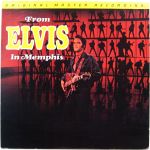 I first heard From Elvis in Memphis the way I heard so many albums back in the late ’70s and early ’80s: on the Mobile Fidelity pressing. I was an audiophile record collector in 1981 and if MoFi was impressed enough with the sound and the music to remaster it and offer it to their dedicated fans, of which I was clearly one, then who was I to say no to an album I had never heard? (Soon enough I would learn my lesson about MoFi’s A&R department. The MoFi release of Supersax Plays Bird, a record that had virtually nothing going for it, was the last time I took their advice.)

Turns out they did a pretty good job on the Elvis album though, not that I would have any way to know — back then it would not even have occurred to me to buy a standard RCA pressing and compare it to my half-speed-mastered pressed-in-Japan, double-the-price-of-a-regular LP. A decade or thereabouts later it would be obvious to me that MoFi had fooled around with the sound and that the right real RCA pressing would be more correct and more natural (but probably not as quiet of course).

It’s Dead As A Doornail sound, plain and simple, a subject we discuss in greater depth here.

Visit our Hall of Shame to see what are in our opinion some of the worst sounding records ever made.