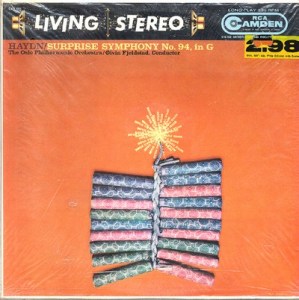 This vintage RCA Living Stereo Camden LP has Super Hot Stamper sound on both sides. It’s one of the best Camdens, if not actually THE best. In true Living Stereo fashion, a natural, realistic concert hall perspective unfolds before you. As we noted about side one: it’s rich, smooth, sweet and tubey — what’s not to like? Lovely sheen on the strings too. This is our kind of sound!

Fjeldstad’s performance is excellent as well. Fjeldstad, you may remember, is the man behind the definitive Peer Gynt on Decca (SXL 2012). His recordings may not be common but they have never disappointed. If you can’t own all 104 of Haydn’s symphonies, make sure that at least this one is in your collection.

A++, rich, smooth, sweet and tubey — what’s not to like? Lovely sheen on the strings. The loudest parts get a bit congested — what Golden Age recordings don’t suffer from compressor distortion? — but other than that this side has the Living Stereo sound we love.

A++, and interesting in this respect: the highs are missing at the beginning, making the sound somewhat dark, but about one inch in on the side they come back, and they come back so nicely, along with many other fine qualities, that the overall sound is actually better than side one! We averaged it out to A++.

Haydn’s music contains many jokes, and the Surprise Symphony includes probably the most famous of all: a sudden fortissimo chord at the end of an otherwise piano opening theme in the variation-form second movement. The music then returns to its original quiet dynamic, as if nothing had happened, and the ensuing variations do not repeat the joke.

In Haydn’s old age, George August Griesinger, his biographer, asked whether he wrote this “surprise” to awaken the audience. Haydn replied:

No, but I was interested in surprising the public with something new, and in making a brilliant debut, so that my student Pleyel, who was at that time engaged by an orchestra in London (in 1792) and whose concerts had opened a week before mine, should not outdo me. The first Allegro of my symphony had already met with countless Bravos, but the enthusiasm reached its highest peak at the Andante with the Drum Stroke. Encore! Encore! sounded in every throat, and Pleyel himself complimented me on my idea.

The work was popular at its premiere. The Woodfall’s Register critic wrote: “The third piece of HAYDN was a new Overture [i.e. symphony], of very extraordinary merit. It was simple, profound, and sublime. The andante movement was particularly admired.”

The Room was crowded last night…. A new composition from such a man as HAYDN is a great event in the history of music. — His novelty of last night was a grand Overture, the subject of which was remarkably simple, but extended to vast complication, exquisitly [sic] modulated and striking in effect. Critical applause was fervid and abundant.

The symphony is still popular today, and is frequently performed and recorded.