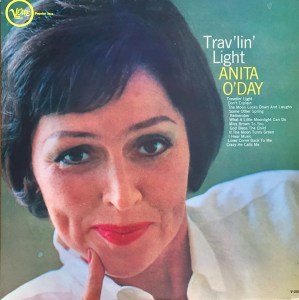 Great players on this one – Ben Webster, Jack Sheldon, Barney Kessel, Al Viola and Mel Lewis are just a handful of the top players on these sessions. A hard record to find in stereo with good vinyl; it took us years to put together this shootout. This ’60s Verve LP has the kind of Tubey Magical Midrange that modern pressings barely BEGIN to reproduce. Folks, that sound is gone and it sure isn’t showing any sign of coming back.

Having done this for so long, we understand and appreciate that rich, full, solid, Tubey Magical sound is key to the presentation of this primarily vocal music. We rate these qualities higher than others we might be listening for (e.g., bass definition, soundstage, depth, etc.). The music is not so much about the details in the recording, but rather in trying to recreate a solid, palpable, real Anita O’Day singing live in your listening room. The best copies have an uncanny way of doing just that.

If you exclusively play modern repressings of older recordings (this one is now 58 years old), I can say without fear of contradiction that you have never heard this kind of sound on vinyl. Old records have it — not often, and certainly not always — but less than one out of 100 new records do, if our experience with the hundreds we’ve played can serve as a guide.

What the best sides of Trav’lin’ Light from 1961 have to offer is not hard to hear:

What We’re Listening For on Trav’lin’ Light

You may have seen RUSSELL GARCIA credited for the arrangements on one of the truly great recordings of the ’50s: Ella Fitzgerald and Louis Armstrong’s Porgy and Bess (1959). We’ve discovered some exceptional original and reissue pressings, as well as some that really do a disservice to the music and the engineers who recorded it. We wasted an awful lot of time and money finding out just how bad some versions of the album can be. I guess that’s what we get paid to do, but it doesn’t make it any less painful or expensive.

A tribute to Anita O’Day’s idol Billie Holiday — who had died less than two years before the making of this recording — O’Day’s performances here are more notable for what she didn’t borrow from her vocal role model. Selections like the title track find her generating a slightly bitter tone quality and languorous phrasing in the manner of Holiday, but most of this beautiful record find O’Day going her own way in a more forthright, less vulnerable manner.

…Half of the tracks feature a small group led by guitarist Barney Kessel while the other half — the more effective tracks, actually — feature now-exuberant, now-exquisite arrangements for big band by Johnny Mandel that make haunting use of muted brass at ballad tempos. This was O’Day’s favorite among her Norgran/Verve albums.