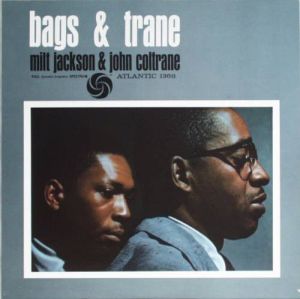 If all you have ever played is an original pressing or a modern reissue, you are in for a treat — this copy is going to murder them.

We found all of this out the hard way, by having some originals and some of the “wrong” reissues in our shootout. Of course, we didn’t know they were not going to be especially good sounding until we played them, but it didn’t take long to recognize there was one stamper and one stamper only that had the sonic goods. It was simply no contest. And it was not an original pressing.

Needless to say, this record has that stamper.

What the best sides of this Classic Jazz Album from 1961 (although recorded in 1959) have to offer is clear for all to hear:

Vibraphonist Milt Jackson and tenor saxophonist John Coltrane make for a surprisingly complementary team on this 1959 studio session, their only joint recording. With fine backup by pianist Hank Jones, bassist Paul Chambers, and drummer Connie Kay, Bags and Trane stretch out on two of Jackson’s originals. …This enjoyable music has been included as part of Rhino’s Heavyweight Champion: The Complete Atlantic Recordings box.

It may be a lot of work but it sure ain’t rocket science, and we never pretended it was. Just the opposite: from day one we’ve explained how to go about finding the Hot Stampers in your own collection. (The problem is that unless your a crazy person who bought multiple copies of the same album there is no way to know if any given copy is truly Hot Stamper. Hot Stampers are not merely good sounding records. They are copies that win shootouts. This is a fact that cannot be emphasized too strongly.