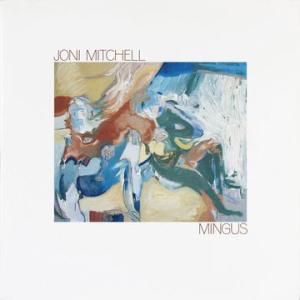 Two of Joni’s more famous late ’70s songs are on here — “God Must Be A Boogie Man” and “The Wolf That Lives In Lindsey.” If you like the more adventurous music that Joni produced at the later stages of her career, this should make a wonderful addition to your collection.

This vintage Asylum LP has the kind of Tubey Magical Midrange that modern pressings cannot BEGIN to reproduce. Folks, that sound is gone and it sure isn’t showing any sign of coming back.

Having done this for so long, we understand and appreciate that rich, full, solid, Tubey Magical sound is key to the presentation of this primarily vocal music. We rate these qualities higher than others we might be listening for (e.g., bass definition, soundstage, depth, etc.). The music is not so much about the details in the recording, but rather in trying to recreate a solid, palpable, real Joni Mitchell singing live in your listening room. The best copies have an uncanny way of doing just that.

If you exclusively play modern repressings of older recordings (this one is now 43 years old), I can say without fear of contradiction that you have never heard this kind of sound on vinyl. Old records have it — not often, and certainly not always — but less than one out of 100 new records do, if our experience with the hundreds we’ve played can serve as a guide.

What To Listen For On Mingus

This copy has the sound we look for in a top quality Joni Mitchell album. A few qualities to listen for:

Immediacy in the vocals (so many copies are veiled and distant).

Natural tonal balance (most copies are at least slightly brighter or darker than ideal; ones with the right balance are the exception, not the rule).

Good solid weight (so the bass sounds full and powerful).

Spaciousness (the best copies have wonderful studio ambience and space).

And last but not least, transparency — the quality of being able to see into the studio, where there is plenty of musical information to be revealed in this simple but sophisticated recording.

Problems To Watch For

You can easily hear that smear on the guitar transients; usually, they’re a tad blunted and the guitar harmonics don’t ring the way they should.

These problems are just as common to the original Asylum pressings as they are to the later label LPs. Smeary, veiled, top-end-challenged pressings were regularly produced over the years. They are the rule, not the exception.

In the months prior to the passing of legendary jazz bassist Charles Mingus, Joni Mitchell had been personally summoned by the bop pioneer to collaborate on a musical version of T.S. Eliot’s Four Quartets. … [Mingus] bestowed Mitchell with six melodies — “Joni I” through “Joni VI” — penned specifically for her.

Mitchell spent a few weeks with Mingus — who was totally immobilized from amyotropic lateral sclerosis (aka Lou Gehrig’s Disease) — during the spring of 1978. Their partnership advanced the half-dozen tunes. More importantly, it shook Mitchell from a three-month long writer’s block/drought — yielding two of her best late-’70s compositions: “God Must Be a Boogie Man” and the revisitation and completion of a track she’d been wood-shedding, now titled “The Wolf That Lives in Lindsey.” Incidentally, the former piece was inspired by the opening chapters of Mingus’ autobiography, Beneath the Underdog.

Initial recordings during Mitchell’s stay with Mingus in New York City produced several interesting experimental sessions with the likes of Stanley Clarke (bass), Jan Hammer (keyboards), John McLaughlin (guitar), Gerry Mulligan (baritone sax), and Tony Williams (drums). A few of these recordings — while rumored to have been lost, destroyed, or made otherwise unavailable — were leaked into the trading community in the late ’90s.

Sprinkled amongst these soulfully jazzy pieces are five “raps,” or aural snapshots of the time Mitchell and Mingus spent together. Sadly, Charles Mingus passed before he was able to listen to this timeless and ageless paean to his remarkable contributions to bop and free jazz.

Mingus is the tenth studio album by Joni Mitchell, and a collaboration with jazz musician Charles Mingus. Recorded in the months before his death, it would be Mingus’s final musical project; the album is wholly dedicated to him.

The album is quite experimental, featuring minimalist jazz, overplucked, buzzing acoustic guitars, and even wolves howling through “The Wolf That Lives In Lindsey”. All of the lyrics are by Mitchell, while the music for four of the songs was composed by Mingus, three being new tunes, a fourth being his tribute to saxophonist Lester Young from his 1959 classic Mingus Ah Um, “Goodbye Pork Pie Hat”, for which Mitchell wrote a set of lyrics.

As with the release preceding, Don Juan’s Reckless Daughter, Mitchell hired personnel from jazz fusion group Weather Report to play on the sessions. Mingus would also mark the first reunion of saxophonist Wayne Shorter and pianist Herbie Hancock in the studio since recording together on Shorter’s seminal Native Dancer album, featuring Milton Nascimento, released in September 1974.