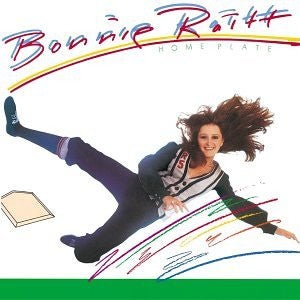 Click here to see more of our favorite Rock and Pop records with relatively unprocessed sound.

This original Palm Tree Warner Brothers pressing has the kind of Tubey Magical Midrange that modern records can barely BEGIN to reproduce. Folks, that sound is gone and it sure isn’t showing signs of coming back. If you love hearing INTO a recording, actually being able to “see” the performers, and feeling as if you are sitting in the studio with the band, this is the record for you. It’s what vintage all analog recordings are known for — this sound.

What We’re Listening For on Home Plate

Homeplate takes Bonnie Raitt even further down the path toward mainstream production than the unjustly maligned Streetlights, but, ironically, it works better than its predecessor. Perhaps that’s because producer Paul A. Rothchild has helped Raitt craft a record that’s unapologetically pitched at the mainstream, where Streetlights often seemed to be torn between two worlds. The great thing about that is, regardless of the production, the essentials of Raitt’s music have not changed. It remains a wonderful hybrid of American music, built on a thoroughly impressive set of songs, all delivered with Raitt’s warm, expertly shaded, and undeniably sexy singing. She’s such an accomplished singer, she sells these songs through productions that are much slicker than those that graced her earlier records, plus with a supporting crew of studio musicians.

This production will undoubtedly dismay listeners that just like the earthiness of Give It Up, but Homeplate is still a success because, even though the recording is glossier, Raitt and her music remain the same and, if you’re looking for that, it’s still irresistible.

Despite its unevenness, this is a vast improvement over Street Lights and accomplishes much of what that LP set out to do in the first place. On Home Plate, the sound is rich and full, and producer Paul Rothchild has used horns and vocal choirs extensively but not gratuitously. Although the approach is more pop oriented than previous efforts for Bonnie Raitt, her own style isn’t cramped in the process. She sings as well as ever and, as her voice continues to mature, maintains more control over it without blunting the jagged edge that makes her so effective.

The unevenness is mostly in the material. Sexual and emotional ambivalence is at the heart of Bonnie Raitt’s best work, so it figures that a certain ambivalence would carry over into her actual choice of what to sing. While her reputation is for raunch, she has always had a fondness for rather empty, precious writers like Eric Kaz, and Kaz’s “I’m Blowin’ Away” and especially “My First Night Alone without You” fail to connect.

However, most of this LP is prime Bonnie Raitt. She is the best of the many interpreters of Allen Toussaint, and “What Do You Want the Boy to Do?” is one of his most melodic recent efforts. “Good Enough” and “Pleasin’ Each Other” get similarly strong treatments. “Sugar Mama,” with its bottleneck guitar and stomping beat, is the hard blues of the album, and “Sweet and Shiny Eyes” is the boozy joke cut.

Bonnie Raitt has yet to make an album that’s solid all the way through, but when she gets the right song, she is the toughest and most evocative female singer of the bunch. This album has its fair share of such songs.