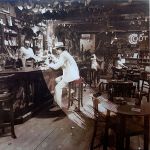 After finishing our first shootout for this album in August of 2007, our faces were sure red. We used to think the Classic version was pretty decent, but the best originals SLAUGHTER it! We had never done a shootout for this album before that. We didn’t feel up to the challenge, because most pressings tend to be miserable — gritty, grainy, hard sounding, with congested mids, dull, and so on.

The best pressings of this album sound AMAZING, but they are few and far between. The test is an easy one — a copy that makes you want to turn up the volume is likely a winner. The Classic does not pass that test.

We threw one on and just couldn’t deal with the edgy vocals and upper midrange boost. As far as we’re concerned, there’s no substitute for The Real Thing.

As hard as it may be to find great sounding copies of this album, it’s positively impossible to sit through Classic’s version.

I used to think the Classic Records pressing was a decent enough record.

Then my stereo got a lot better, which I write about under the heading Progress in Audio.

Eventually it became obvious to me what was wrong with practically all of the Heavy Vinyl pressings that were put out by that label.

The good ones can be found in this group, along with other Heavy Vinyl pressings we liked or used to like.

The bad ones can be found in this group.

And those in the middle end up in this group.

Audio and record collecting (they go hand in hand) are hard. If you think either one is easy you are very likely not doing it right,, but what makes our twin hobbies compelling enough to keep us involved over the course of a lifetime is one simple fact, which is this: Although we know so little at the start, and we have so much to learn, the journey itself into the world of music and sound turns out to be both addictive and a great deal of fun.

Every listing in this section is about knowing now what I didn’t know then, and there is enough of that material to fill its own blog if I would simply take the time to write it all down.

Every album shootout we do is a chance to learn something new about records. When you do them all day, every day, you learn things that no one else could possibly know who hasn’t done the work of comparing thousands of pressings with thousands of other pressings.

The Law of large numbers[ tells us that in the world of records, more is better. We’ve taken that law and turned it into a business.

It’s the only way to find Better Records.

Not the records that you think are better.

No, truly better records are the records that proved themselves to be better empirically. We employ rigorous scientific methodologies that we have laid out in detail for anyone to read and follow.

Being willing to make lots of mistakes is part of our secret, and we admit to making a lot of them

Music Matters made this garbage remaster. Did anyone notice how awful it sounded? I could list a hundred more that range from bad to worse — and I have!