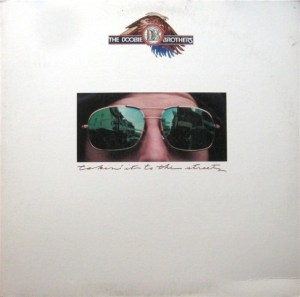 Most copies of this record are such a letdown, it’s hard to imagine that many audiophiles could be bothered to take it seriously. But they should; the band cooks on practically every song, and the writing is some of their best, with essential Doobies tracks like Losin’ End and It Keeps You Runnin’ and no real dogs in the bunch.

What We’re Listening For on Takin’ It To The Streets

Recently we did one of our regular shootouts for Takin’ It To The Streets, using pressings we know from experience to have the potential for Hot Stamper sound. We cleaned them as carefully as we always do. Then we unplugged everything in the house we could get away with, carefully warmed up the system, Talisman’d it, found the right VTA for our Triplanar arm (by ear of course) and proceeded to spend the next couple of hours playing copy after copy on side one, after which we repeated the process for side two.

The group’s first album with Michael McDonald marked a shift to a more mellow and self-consciously soulful sound for the Doobies, not all that different from what happened to Steely Dan — whence McDonald (and Jeff Baxter) had come — between, say, Can’t Buy a Thrill and Pretzel Logic.

They showed an ability to expand on the lyricism of Patrick Simmons and Baxter’s writing on “Wheels of Fortune,” while the title track introduced McDonald’s white funk sound to their output, successfully.

“Rio” and “It Keeps You Runnin'” both manage to sound like Steely Dan tracks — and that’s a compliment — while Tiran Porter’s hauntingly beautiful “For Someone Special” was a pure soul classic right in the midst of all of these higher-energy pieces.

Tom Johnston’s “Turn It Loose” is a last look back to their earlier sound, while Simmons’ “Carry Me Away” shows off the new interplay and sounds that were to carry the group into the 1980s, with gorgeous playing and singing all around.