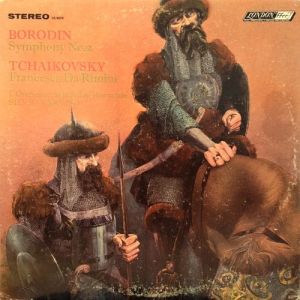 This London Whiteback pressing (CS 6578) has SHOCKINGLY GOOD sound; in many ways it deserves to be called a Demo Disc. It has at least one quality that one virtually never hears on an audiophile reissue: a smooth, natural top end. This record only sounds correct and “real” at louder volumes, in the same way that a live orchestra often sounds a bit lifeless in the quiet passages, only to get exciting, big and powerful when the score calls for it. For this to happen on record you need real dynamics and tonal neutrality.

We have not heard many audiophile reissues pull these things off either, just two of the reasons we no longer carry them.

And you can find all the other reasons on the site easily enough. We can’t stop talking about how disappointing Heavy Vinyl sounds to us now.

We graded both sides AT LEAST A++, a bit vague we admit; we just don’t have enough copies to know if the sound could get much better.

We played a good many vintage classical LPs that day and this was clearly one of the best sounding, so we feel this grade should be accurate, perhaps even conservative.

Credit for the sound must go to the Decca engineers, of course, but also to the hall that the L’Orchestre de la Suisse Romande played in, where so many of the great Ansermet recordings were made. This recording is from 1968. Ansermet died in 1969. One imagines that he was perhaps not able to conduct at this stage of his life and turned his wonderful orchestra and hall over to Varviso, a man better known for conducting operas at the time.

At Least A++, with the kind of Golden Age sound that has rarely if ever been realized in the modern era. Big, wide and deep, with smooth, rich orchestral sound, these are the kind of records that let you forget the sound and just enjoy the music. The performance is taken a brisk pace, rarely a bad thing.

At Least A++, and a lovely work that has never made it to the site in Hot Stamper form before, hint hint.

Rich, with deep bass, big stage, huge space and so 3-D, this is what we love about vintage recordings. And a great performance as well.