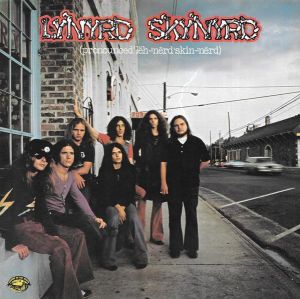 This vintage original Sounds of the South/MCA yellow label pressing has the kind of Tubey Magical Midrange that modern records can barely BEGIN to reproduce. Folks, that sound is gone and it sure isn’t showing signs of coming back. If you love hearing INTO a recording, actually being able to “see” the performers, and feeling as if you are sitting in the studio with the band, this is the record for you. It’s what vintage all analog recordings are known for — this sound.

Think about it: if you had only seven copies, you might not have ever gotten to hear a copy that sounded that open and clear. And how many even dedicated audiophiles would have more than one or two clean vintage copies with which to do a shootout? These records are expensive and hard to come by in good shape. Believe us, we know whereof we speak when it comes to getting hold of early early pressings of Classic Rock albums.

The Allman Brothers came first, but Lynyrd Skynyrd epitomized Southern rock. The Allmans were exceptionally gifted musicians, as much bluesmen as rockers. Skynyrd was nothing but rockers, and they were Southern rockers to the bone. This didn’t just mean that they were rednecks, but that they brought it all together — the blues, country, garage rock, Southern poetry — in a way that sounded more like the South than even the Allmans. And a large portion of that derives from their hard, lean edge, which was nowhere more apparent than on their debut album, Pronounced Leh-Nerd Skin-Nerd.

Produced by Al Kooper, there are few records that sound this raw and uncompromising, especially records by debut bands. Then again, few bands sound this confident and fully formed with their first record. Perhaps the record is stronger because it’s only eight songs, so there isn’t a wasted moment, but that doesn’t discount the sheer strength of each song. Consider the opening juxtaposition of the rollicking “I Ain’t the One” with the heartbreaking “Tuesday’s Gone.” Two songs couldn’t be more opposed, yet Skynyrd sounds equally convincing on both.

If that’s all the record did, it would still be fondly regarded, but it wouldn’t have been influential. The genius of Skynyrd is that they un-self-consciously blended album-oriented hard rock, blues, country, and garage rock, turning it all into a distinctive sound that sounds familiar but thoroughly unique. On top of that, there’s the highly individual voice of Ronnie Van Zant, a songwriter who isn’t afraid to be nakedly sentimental, spin tales of the South, or to twist macho conventions with humor. And, lest we forget, while he does this, the band rocks like a motherf*cker. It’s the birth of a great band that birthed an entire genre with this album.