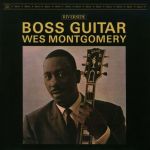 This is one of Wes Montgomery’s best albums from his prime ’60s period, if not THE best. Rich and full-bodied but clear and spacious, the 1963 All Tube Analog sound is perfect for Wes’s organ trio format.

Before he moved away from straight-ahead jazz and starting playing what is now known as smooth jazz, Wes Montgomery was one of bop’s finest guitarists. Montgomery’s bop period ended much too soon, but thankfully, he recorded his share of rewarding bop albums when he was still bop-oriented — and one of them is Boss Guitar, which Orrin Keepnews produced in 1963.

It’s a trio recording, employing Mel Rhyne on organ and Jimmy Cobb on performances that have held up well over time… Boss Guitar is among the bop-oriented Montgomery albums that should continue to be savored after all these years.

Of Wes Montgomery, most jazzbos say that the axe man’s peppy version of the Latin “Besame Mucho” is the best track on the legendary 1963 Boss Guitar Riverside recording. Sure, Montgomery plays the lead hot. The normally laidback love song takes on a fiery intensity through the Rev’s (as Montgomery was known for his teetotalin’ ways) single-note flurries and fast-paced chords. However, while that piece as the opening track allows the guitarist to show off his technical abilities, it’s the slow songs that allow him and his two bandmates to really express themselves.

Take, for example, the Rev’s leisurely approach to Henry Mancini’s theme song to the movie Days of Wine and Roses (ironically, a film about alcohol addiction). Montgomery’s unhurried playing shows off the beauty of the melody. Jimmy Cobb’s brushwork on drums sounds as natural as a flowing stream and Mel Rhyne’s Hammond B-3 organ gently lays down an atmospheric drone. Montgomery is obviously the boss here, and the unusualness of having the guitar lead a jazz trio disappears through the fluidity of th0000e music.

The same can said for the ballad “For Heaven’s Sake”, a tune best known as a love song by Billie Holiday. The instrumental version here comes off just as romantic, although Rhyne’s organ work does get a little churchy at the end. Montgomery’s soft playing seems right on the mark, going for the tenderness at the heart of the melody.

Remember, the American rock music scene in 1963 was in its doldrums. This was the year when the Singing Nun had the number one record, and other sappy tunes like “Blue Velvet” and “Hey Paula” ruled the charts. Sure, there were the Ronettes and the Beach Boys, not to mention Bob Dylan doing “Blowin’ in the Wind”, “Masters of War”, and “A Hard Rain’s A Gonna Fall”. These may be fine songs, but do you really want to make love to them? Jazz filled that niche back then, and nobody really did it with more suavity than Montgomery (with apologies to the Blue Note roster, which put out some consistently fine music that year, but the music of Jimmy Smith, Kenny Burrell, Grant Green and company certainly sounds more in its place at a nightclub or barroom than home in a bedroom).

While it may not be Montgomery’s finest release—that would be a matter of opinion more than fact—it certainly is one of the celebrated guitarist’s most notable achievements. If you are looking for some smooth jazz that’s not somnambulant, passionate yet relaxed, intimate without being overly dramatic … in other words, if you are looking for cool, this is the place to find it.