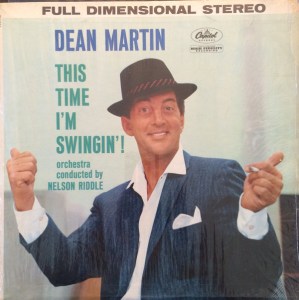 If you’re a fan of the Capitol Sinatra sound you’ll love this record. It’s an exceptionally difficult title to find in anything but trashed condition. I’ve been a fan of this record for many years but this is the first copy we’ve been able to find that’s clean enough to go up on the site with White Hot Stamper grades.

So many things can go wrong on a record! We know, we’ve heard them all.

What We’re Listening For On This Time I’m Swingin’

Dean Martin finally got access to conductor/arranger Nelson Riddle for an album project, and the result was an easy swinging collection with appealing horn charts and a series of comfortable readings of recent and vintage standards.

Especially notable were the two songs borrowed from My Fair Lady, “On the Street Where You Live” and “I’ve Grown Accustomed to Her Face,” which Martin and Riddle re-imagined as straight-forward love songs; “You’re Nobody ’til Somebody Loves You” (which Martin would try again in a more contemporary arrangement four years later for one of his biggest hits); and a solo version of “Just in Time,” which the singer had recently done with Judy Holliday in the film version of the musical Bells Are Ringing.

This Time I’m Swingin’! was a good, confident set by an artist who had figured out how to make competent albums without expending a lot of effort, which was a key to his charm.