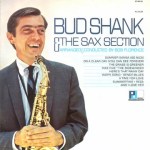 More of the Music of Bud Shank

Reviews and Commentaries for the Music of Bud Shank

I used to sell reissues of this record back in the day some twenty odd years ago. While they aren’t terrible — lackluster is a more apt description — we can clearly hear now that they are made from second generation tapes.

The stage is recessed and collapsed, and the sound never gets big enough nor lively enough to free itself from the speakers. (This happens to be our all-too-common experience with many of the Heavy Vinyl pressings we audition and consequently write mean things about. Can you blame us? We loathe that sound.) 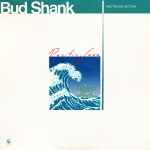 It’s yet another example of a record we was wrong about. Live and Learn, right?

I would not buy any Pacific Records pressing with this style reissue cover. We’ve never heard one sound better than mediocre on our current system.

Botnick Is The Man

Bruce Botnick sure knew what he was doing on this session. He succeeded brilliantly in capturing the unique sound of each of the saxes. The album is really more of a West Coast pop jazz record than it is a “real” jazz record. The arrangements are very tight, the songs are quite short — none exceed three and a half minutes — so there is not a lot of classic jazz saxophone improvisational blowing going on.

Spacious and transparent with plenty of analog Tubey Magic to go around, this is a really wonderful way to hear the music. The sax sound is excellent — rich and full, with none of the hard, edgy quality we heard on the less than stellar pressings. For richness and Tubey Magic — with no sacrifice in clarity or dynamics — these sides just could not be beat.

The Bass Sax — What a Sound!

The reason this album is so appealing to us audiophiles is that the sound of each of the saxophones is clearly recognizable as they weave in and around these arrangements. On the back cover you can see a fellow holding a bass saxophone, an instrument you don’t hear too often, perhaps it’s fallen from favor. (It solos at the beginning of Sidewinder on side one. Once you hear it you will be dying to play that song for your audiophile buddies, I guarantee it. What a sound!)

Even the baritone working off of the tenors and the altos is exciting and fun on this album. These guys are swinging big-time in the West Coast style we love here at Better Records. They’re not angry. They’re not out to prove anything. What they have going for them is lots of musical chops (being studio guys who can read and play anything you care to throw at them) and some very clever, very interesting arrangements by the amazingly talented Bob Florence, who worked out variations for all the sounds that a saxophone can make, or in this case, the sounds six saxophones can make. These guys are having a lot of fun in the studio with these tunes and the feeling is contagious.

Bud Shank had a split musical personality during the 1960s. On the one hand he could tear your heart out with edgy playing on ballads and up-tempo pieces. But Bud also could lay back and surf melodies beautifully. He recorded this album in the middle of a highly commercial period for Pacific Jazz. At the time he was recording bossa nova albums (Brasil! Brasil! Brasil!) and LPs that tried to capitalize on the surging rock trend (A Spoonful of Jazz and Magical Mystery). Some were more successful than others and all had heart.

Tracks on The Sax Section include Summer Samba, On a Clear Day, the Sidewinder and And I Love Her. As you can see, the material was all over the lot hoping to appeal to everyone. And yet the album works, largely because of Bob Florence’s arrangements and the shrewd doubling of the baritone and bass sax parts, which give the charts heft at the bottom. Florence also had the good sense to widen out the voicings and extend the counterpoint—making the section sound like a full band rather than one instrument. The overall sound remains wonderfully reedy and flighty. Interestingly, Jack Nimitz was the sole member of this sax section who wound up as a member of Supersax.