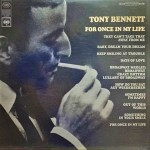 Reviews and Commentaries for the Recordings of Frank Laico

Amazing vocal reproduction courtesy of the brilliant engineering of Frank Laico at his favorite studio (and ours), Columbia 30th Street studios

We are not big soundstage guys here at Better Records, but we can’t deny the appeal of the space to be found on a record as good as this

On this record Mr. Tony Bennett himself will appear to be standing right in your listening room! The space of your stereo room will seem to expand in all directions in order to accommodate them, an illusion of course, but nevertheless a remarkably convincing one.

They Can’t Take That Away From Me
Something In Your Smile
Days Of Love
Broadway Medley:
– Broadway
– Crazy Rhythm
– Lullaby Of Broadway
For Once In My Life

Those of you who think of “For Once In My Life” as a Stevie Wonder song, reconsider. True, Wonder took it to #2 in 1968, but Tony Bennett’s ballad version was a pop chart entry (his last) and an Easy Listening Top 10 more than a year earlier. On the accompanying album Bennett made his by-now usual selections of standards (“They Can’t Take That Away From Me”), Broadway and Hollywood material, and choices from the catalogs of songwriter favorites such as Leslie Bricusse and Cy Coleman.

For our shootout for For Once In My Life we had at our disposal a variety of pressings we thought should have the potential for Hot Stamper sound. We cleaned them carefully, then unplugged everything in the house we could, warmed up the system, Talisman’d it, found the right VTA for our Triplanar arm (by ear of course) and proceeded to spend the next hour or so playing copy after copy on side one, after which we repeated the process for sides two, three and four.