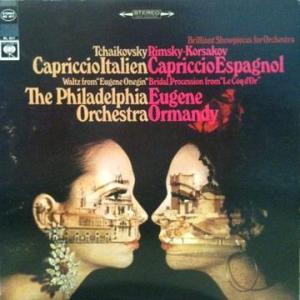 We’ve had copies of the album in the past, but they sure never sounded like this! From both an audiophile and music lover’s perspective, you would have a hard time finding a record that holds this much appeal to both groups.

The orchestra is big and rich, and there is lovely sheen to the strings. The piano is surrounded by plenty of space, with great depth to the hall. The weight and bite of the brass are near perfection. The top is extended and open. And the loud passages are big and stay smooth, with very little congestion even at the climax of the work. So LIFELIKE this way.

What We’re Listening For on this wonderful recording

Alborada
Scene And Gypsy Song
Fandango Of The Asturias

Capriccio Espagnol, Op. 34, is the common Western title for an orchestral work based on Spanish folk melodies and written by Nikolai Rimsky-Korsakov in 1887. Rimsky-Korsakov originally intended to write the work for a solo violin with orchestra, but later decided that a purely orchestral work would do better justice to the lively melodies.

The piece is often lauded for its orchestration, which features a large percussion section and many special techniques and articulations, such as in the fourth movement when the violinists, violists, and cellists are asked to imitate guitars (the violin and viola parts are marked “quasi guitara”). Despite the critical praise, Rimsky-Korsakov was annoyed that the other aspects of the piece were being ignored. In his autobiography, he wrote:

The opinion formed by both critics and the public, that the Capriccio is a magnificently orchestrated piece — is wrong. The Capriccio is a brilliant composition for the orchestra. The change of timbres, the felicitous choice of melodic designs and figuration patterns, exactly suiting each kind of instrument, brief virtuoso cadenzas for instruments solo, the rhythm of the percussion instruments, etc., constitute here the very essence of the composition and not its garb or orchestration. The Spanish themes, of dance character, furnished me with rich material for putting in use multiform orchestral effects. All in all, the Capriccio is undoubtedly a purely external piece, but vividly brilliant for all that. I was a little less successful in its third section (Alborada, in B-flat major), where the brasses somewhat drown the melodic designs of the woodwinds; but this is very easy to remedy, if the conductor will pay attention to it and moderate the indications of the shades of force in the brass instruments by replacing the fortissimo by a simple forte.