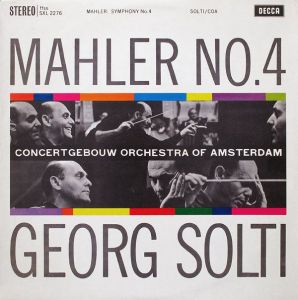 Deep bass; rich, smooth strings, lots of lovely hall space – this copy was right up there with the best we heard, and clearly won the shootout for side two. You will hear immediately why this side two could not be beat – it’s wonderful.

What amazing sides such as these are doing right is not hard to hear:

No doubt there’s more but we hope that should be enough for now.

And of course, playing the record is the only way to hear all of the above.

An Orchestra Needs This Kind of Space

Mahler had begun work on the 4th symphony in 1899 but the ingredients were not all created from scratch. The music of the final movement dates back to 1892 and a particular collection of songs he composed that February. Many were destined to become part of the epic folk-cycle Das Knaben Wunderhorn but the stand-alone Das himmlische Leben (“Heavenly life”) was intended to be an important component of the massive 3rd Symphony. Indeed, melodic material from this song can be found in that earlier work but Mahler soon realized that it deserved more elaborate treatment.

With a technique not uncommon in Mahler’s oeuvre, he used an idea from one symphony to inform another. Much like the trumpet fanfare in the 4th Symphony’s first movement that foreshadows the 5th Symphony, the “Leben” song fragments of the 3rd Symphony’s fifth movement find their apotheosis in the 4th.

There is a decidedly “Classical” feel to the score of the 4th Symphony and the work employs a much more concentrated emotional profile than the prior symphonies. The child’s view of heaven depicted in the 4th Symphony’s closing movement is largely responsible for this overarching simplicity but there is also a sense that Mahler was attempting something novel with this work.

Interestingly, he does not supply explanatory titles to the first three movements (a rarity to this point in his career) but rather allows the music, in all its sunny subtlety, to speak for itself.

Wilkinson went on to engineer at hundreds of recording sessions. He was said to have worked with more than 150 conductors. He was the engineer most responsible for Richard Itter’s Lyrita recordings (which Decca produced). Itter always requested Wilkinson as engineer, calling him “a wizard with mics.”

His recordings were characterized by the producer Tam Henderson in an appreciation: “The most remarkable sonic aspect of a Wilkinson orchestral recording is its rich balance, which gives full measure to the bottom octaves, and a palpable sense of the superior acoustics of the venues he favored, among them London’s Walthamstow Assembly Hall and The Kingsway Hall of revered memory”.