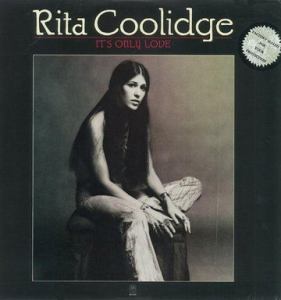 *NOTE: On side one, a noisy edge clears up during the intro to Track 1, Born To Love Me.

What We’re Listening For on It’s Only Love

After singing around Memphis (including a stint singing jingles), Coolidge was discovered by Delaney & Bonnie, who worked with her in Los Angeles. There, she became a background singer for artists including Leon Russell, Joe Cocker, Harry Chapin, Bob Dylan, Jimi Hendrix, Eric Clapton, Dave Mason, Graham Nash, and Stephen Stills. She was featured in Joe Cocker’s Mad Dogs and Englishmen tour and album, singing Russell’s and Bonnie Bramlett’s song “Superstar.” Coolidge did not receive songwriting credits for “Superstar” which later became a hit for The Carpenters.

She became known as “The Delta Lady” and inspired Russell to write a song of the same name for her.

In November 1970, she met Kris Kristofferson at the Los Angeles airport when they were both catching the same flight to Tennessee. He got off in Memphis with her, rather than continue to his intended destination in Nashville. The two married in 1973 and recorded several duet albums, which sold well and earned the duo a Grammy Award for Best Country Performance by a Duo or Group with Vocal in 1974 for “From the Bottle to the Bottom”, and in 1976 for “Lover Please.”

It’s Only Love was recorded while she was married to Kris Kristofferson.