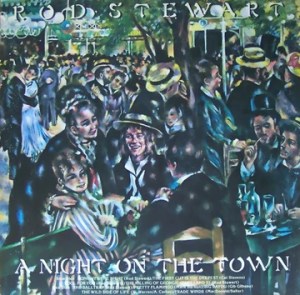 This original Warner Brothers Palm Tree pressing has the kind of Tubey Magical Midrange that modern records can barely BEGIN to reproduce. Folks, that sound is gone and it sure isn’t showing signs of coming back. If you love hearing INTO a recording, actually being able to “see” the performers, and feeling as if you are sitting in the studio with the band, this is the record for you. It’s what vintage all analog recordings are known for — this sound.

What We’re Listening For on A Night On The Town

The Balltrap
Big Bayou
The Wild Side Of Life
Trade Winds

In some ways, it’s easy to think of A Night on the Town, Rod Stewart’s second album for Warner, as a reprisal of the first, cut with many of the same musicians as Atlantic Crossing, produced once again by Tom Dowd, and even following its predecessor’s conceit of having a “Slow Side” and “Fast Side” (granted, this flips the two around, opening with the slow one first). Superficially, this seems true, but A Night on the Town has a crucial difference: despite its party-hearty title, this album finds Stewart folding folk back into his sound, a move that deepens the music tonally and emotionally, particularly in the case of “The Killing of Georgie (Pts. 1 & 2),” Rod’s most ambitious original.

A winding, sensitive narrative about the murder of a gay friend — a hate crime years before the term existed — “The Killing of Georgie” finds Stewart filtering Dylan through his own warm, conversational style, creating a remarkable work unlike anything else in his body of work, yet the song’s smooth synthesis of folk storytelling, soul, and incipient disco act as an appropriate conclusion to a side-long suite of songs of seduction, beginning with his classic come-on “Tonight’s the Night (Gonna Be Alright),” running through his splendid reading of Cat Stevens’ “The First Cut Is the Deepest,” and his fine original “Fool for You.” On the Fast Side, Stewart has only one original — the lewd, riotous “The Balltrap” — but he more makes up for it by spinning two country classics, Gib Guilbeau’s “Big Bayou” and Hank Thompson’s “The Wild Side of Life,” into thick, Stonesy rock & roll, and turning Manfred Mann’s “Pretty Flamingo” into a rave-up.

With all this in mind, A Night on the Town isn’t a revival of Atlantic Crossing, it’s its inverse, with Stewart shining as an interpreter on the fast songs and writing the best slow ones, but it’s also its equal, proving that Stewart could still stay true to his open-hearted, ragged soul while on a big budget.