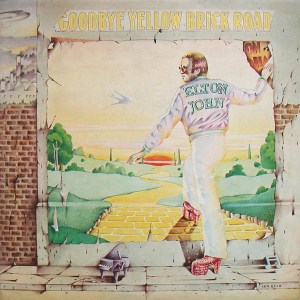 GYBR has the best rocker Elton and Bernie ever wrote: Saturday Night’s Alright for Fighting. Of course, it’s one of the tracks on side four we used to test with — if you’re going to listen to GYBR all day, why not play the songs that are the most fun to play? On the good pressings, the song just KILLS.

Some British copies on some sides sound too much like a modern reissue; they lack weight and tend to be too “clean” sounding. We take serious points off when records sound modern, a sound the current spate of reissues cannot get away from and one of the main reasons we gave up on them many, many years ago. Not our thing, sorry.

As you’re playing your copy at home, or maybe this one if you end up with it, listen for the Abbey Road guitars; they are everywhere on this album, along with some Abbey Road arrangements and chord progressions. Caleb Quaye’s wah wah from all of Elton’s classic early albums is gone; he wouldn’t return until Rock of the Westies, an album I quite like but one that nobody else seems to care for. (Admittedly the sound is not what it should be.)

What We’re Listening For on Goodbye Yellow Brick Road

Elton John albums always make for tough shootouts. His producers’ (GUS DUDGEON being the best of them) and engineers’ (KEN SCOTT and ROBIN GEOFFREY CABLE, likewise the best) approach to recording — everything-but-the-kitchen-sink as a rule — make it difficult to translate their complex sounds to disc, vinyl or otherwise.

GYBR is a recording that belongs in any serious Rock Music Collection.

Goodbye Yellow Brick Road was where Elton John’s personality began to gather more attention than his music, as it topped the American charts for eight straight weeks. In many ways, the double album was a recap of all the styles and sounds that made John a star. Goodbye Yellow Brick Road is all over the map, beginning with the prog rock epic “Funeral for a Friend (Love Lies Bleeding)” and immediately careening into the balladry of “Candle in the Wind.” For the rest of the album, John leaps between popcraft (“Bennie and the Jets”), ballads (“Goodbye Yellow Brick Road”), hard rock (“Saturday Night’s Alright for Fighting”), novelties (“Jamaica Jerk-Off”), Bernie Taupin’s literary pretensions (“The Ballad of Danny Bailey”), and everything in between… its individual moments are spectacular and the glitzy, crowd-pleasing showmanship that fuels the album pretty much defines what made Elton John a superstar in the early ’70s.