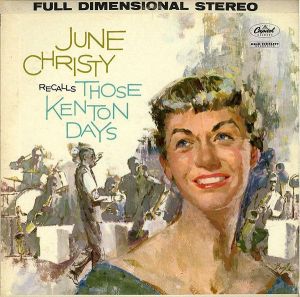 This vintage Capitol Stereo pressing has the kind of Tubey Magical Midrange that modern records rarely begin to reproduce. Folks, that sound is gone and it sure isn’t showing any sign of coming back.

Hot Stamper sound is rarely about the details of a given recording. In the case of this album, more than anything else a Hot Stamper must succeed at recreating a solid, palpable, real June Christy singing live in your listening room. The better copies have an uncanny way of doing just that.

What the best sides of June Christy Recalls Those Kenton Days have to offer is not hard to hear:

During a near-decade-long run, June Christy’s soaring and bright vocals proved to be ideal for the Stan Kenton band’s modern and idiosyncratic jazz charts. Thanks to Pete Rugolo and Bob Cooper’s increasingly tailor-made arrangements, Christy soon became the star attraction of the group and eventually cashed in on her own with a string of fine solo LPs.

Released after her classic Something Cool and The Misty Miss Christy albums, this ten-song solo collection is comprised of updated Christy-Kenton favorites like “Just A-Sittin’ and A-Rockin,” “Across the Alley from the Alamo,” and “The Lonesome Road.” Nearly matching his stellar work on many earlier Christy albums, Rugolo handles the charts and conducts a large group of Kenton veterans like Cooper, drummer Shelly Manne, and trombonists Milt Bernhardt and Frank Rosolino. Other jazz luminaries such as guitarist Jim Hall, bassist Red Callender, trumpeter Russ Freeman, and saxophonist Paul Horn round out the band.

June Christy Recalls Those Kenton Days might not rate with Something Cool or The Misty Miss Christy as a first-disc choice, but it is still a must for serious June Christy fans.