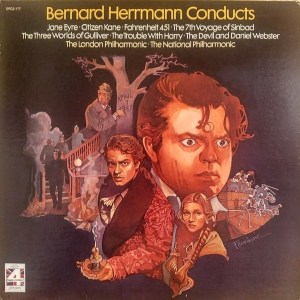 [PLEASE NOTE: We no longer give Four Pluses out as a matter of policy, but that doesn’t mean we don’t come across records that deserve them from time to time.]

This Beyond White Hot Stamper Side Two completely blew our minds with Bernard Herrmann orchestral MAGIC. Side two is just OUT OF THIS WORLD. Since side two is where the Three Worlds of Gulliver suite is found — the very same superbly recorded music that is on Harry’s Super Disc List — you can be sure that is this is some of the best sounding Bernard Herrmann music you will ever have the opportunity to hear, if not THE best. The sound is DEMONSTRATION QUALITY of the HIGHEST ORDER.

When it comes to this side two what we have here is a record that sounds so good, with the needle hits the groove you will feel like you’ve just threaded up the master tape and hit play. The effect is that you’re so totally IMMERSED in the musical experience you forget you’re listening to a record. You’re hearing the music exactly the way the musicians intended it to sound. You can’t ask for more than that.

Side two also boasts some wonderful material from Jason and the Argonauts, the fight with the skeletons that we all remember from our Saturday matinee movie days. Who else could have orchestrated such a film?

You simply cannot find music recorded with more orchestral color than the series of albums and compilations brilliantly engineered by Arthur Lilley and produced for London Phase 4 by Tony D’Amato.

Keep in mind that even though these recordings are necessarily multi-miked, Herrmann’s “sound” lends itself beautifully to this approach. The best of them reproduce the width and depth of a real hall with wonderful fidelity, much better fidelity than is found on Mehta’s Planets for example, a record no one seems to criticize much for its bad soundstaging these days (other than us of course).

Side two was in a league of its own; no other copy could touch it on any side. We don’t give out many Four Plus ratings but after hearing this side two we knew we had to give one out here. It is nothing short of breathtaking. You could easily play a hundred records and not hear one that sounded as good. Better make that two hundred or even three hundred.

Side one is quite a step down sonically. With a grade of A Plus it’s better than average but lacks the instrumental detail and hall transparency that side two has in abundance. We found it musical and enjoyable but watch out: When you flip the record over to side two be prepared to hear sound you many never have experienced before, (assuming you have the kind of system that can play large-scale orchestral works).