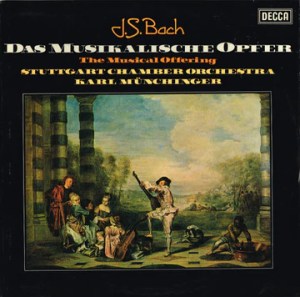 James Lock was the engineer for these sessions from July 1976 in Germany’s glorious Schloss Ludwigsburg palace. It’s a remarkable disc, especially when one considers it comes from what was undeniably the post-Golden Age of Vacuum Tube Recording.

What We’re Listening For On Bach’s Musical Offering

[This commentary is about Bach’s The Art of the Fugue, which the author notes was based on the work Bach had done to create The Musical Offering]

Few composers have ended their careers with a work that serves to epitomize their skills. Many succumbed long before they could anticipate their demise, while others lingered on as their inspiration and energy dissipated. As his blindness advanced and his health declined, Johann Sebastian Bach poured his final strength into “one of the truly great creations of the human mind” (Karl Geiringer), a “philosophical breviary, every measure of which invites reflection and thought” (Paul Henry Lang) that “even Bach himself never produced before in his life” (Philipp Spitta). Even today Bach’s final work, Die Kunst der Fuge (The Art of the Fugue), stands as not only the ultimate monument to his own wide-ranging genius but an enduring shrine to the art of an entire epoch. Yet it is no dry memorial. Although incomplete, quixotic and partly abstract, it has attracted, challenged and enthralled musicians, scholars and listeners of every era.

The primary model for the Art of the Fugue often is traced to Bach’s prior work, the Musical Offering. In May 1747 Bach travelled to Potsdam to visit his son Phillip Emanuel, who was serving as harpsichordist at the court of King Frederick II. According to a local newspaper account, upon Bach’s arrival:

His Majesty immediately ordered his admission and, upon his entry, went to the so-called ‘Forte and Piano’ and without any preparation personally condescended to play Capellmeister Bach a theme that the latter should improvise into a fugue. This was accomplished by the aforesaid Capellmeister Bach so successfully that not only was His Majesty inclined to indicate his pleasure, but all other persons present were given to great astonishment.

The fugue arose long before Bach. Its basic components and techniques were in place a century earlier… Yet commentators constantly remind us that despite these basic rules and devices fugue is not a rigid form but a springboard for creativity – Donald Francis Tovey calls it a texture rather than a design, and Glenn Gould considers it “an invitation to invent a form relevant to the idiosyncratic demands of the composition.” Indeed, Bach’s glory is that he transcended conventions even while exemplifying them, crafting masterworks that combine the seemingly irreconcilable poles of dazzling traditional technique and vast far-reaching imagination to satisfy both intellect and emotion. Although often studied in microscopic detail by the most sophisticated musicians, a Bach fugue rewards even purely intuitive listeners with a sense of structure that unifies formality with flights of fantasy, at once soothing and provocative.

The Musical Offering is full not only of invention but considerable wit and a touch of mystery. One canon (teasingly inscribed “he who seeks shall find”) is a puzzle, printing only the first part and requiring would-be performers to determine where, of all the possible permutations of transposition, inversion, retrograde, rhythm and note-value, to insert the same theme as the second part to make the most musical sense.

What would Bach have thought of all this? I suspect he might have been deeply pleased, and perhaps even thrilled. After all, he constantly adapted his own works to suit available forces and occasions. More important, he had to have died saddened in the knowledge that his art was being supplanted by the next generation of composers (led by his own children). Bach’s Art of the Fugue serves as a sort of time-capsule to preserve the style he had perfected and to which he had devoted so much of his life – written not in a vain attempt to impede the inevitability of esthetic evolution but as a signpost along the way, not to grasp for personal immortality but as a humble memorial to a moment in time that eventually might take its rightful place in history. Yet here we are a dozen generations later when his art not only is acknowledged by historians, analyzed by theoreticians and studied by scholars but is being outright enjoyed by modern performers and listeners alike, and all without compromising its integrity. That, it seems to me, is the ultimate tribute to any artist and the true vindication of his vision.