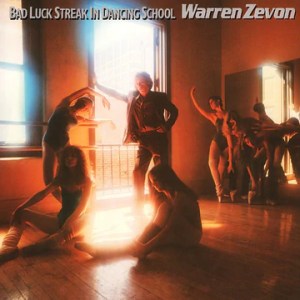 This original Asylum pressing has the kind of Tubey Magical Midrange that modern records can barely BEGIN to reproduce. Folks, that sound is gone and it sure isn’t showing signs of coming back. If you love hearing INTO a recording, actually being able to “see” the performers, and feeling as if you are sitting in the studio with the band, this is the record for you. It’s what vintage all analog recordings are known for — this sound.

Excitable Boy earned Warren Zevon a hit single (“Werewolves of London”) and the mainstream success he richly deserved, but his new fame came with a price; the hard-living Zevon did not react well to the temptations that come with rock stardom, and in the wake of Excitable Boy he had developed a severe drinking problem. Bad Luck Streak in Dancing School was cut as Zevon was working hard to stay clean and sober and put his career back on track, and it projects an ambition and strength of focus that was decidedly absent from Excitable Boy.

The album’s rockers hit harder and cut deeper than any of his previous work, especially the twisted Southern gothic of “Play It All Night Long” and the mercenary’s anthem “Jungle Work,” while “Bed of Coals” and “Wild Age” found Zevon bravely addressing his own failings and expressing his need for a greater maturity in his life. While the album was still short on subtlety compared to 1976’s Warren Zevon, “Empty Handed Heart” proved Zevon could still write a straightforward song about love (not a happy one, but no one expected that from him anyway), and the two interludes for orchestra gave credence to Zevon’s claims that he planned to write a symphony some day (and that it might even be worth hearing).

. . . While Bad Luck Streak in Dancing School didn’t quite return Zevon to the top of his game, it made clear that the quality of Warren Zevon was no fluke, and is a stronger effort than Excitable Boy in nearly every respect.