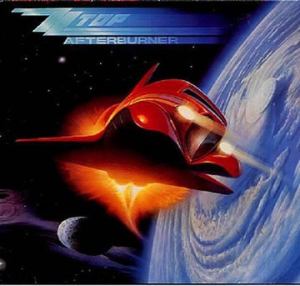 What the best sides of Afterburner have to offer is not hard to hear:

What We’re Listening For on Afterburner

Who could have predicted the enormous success of ZZ Top’s 1983 album ELIMINATOR? The “Little Ol’ Band from Texas” racked up five singles and sold 10 million copies by welding their blues and boogie to a bank of synthesizers and sequencers, then jamming the entire thing in the back of a 1933 Ford Coupe and setting off for wherever MTV programming executives were hiding out back then.

When it came time for a follow-up, the band made the astute business decision to give their new fans more of the same—more keyboards, more drum machines, more songs with even more euphemisms for sexual activity. And then when they were done with that, they added more keyboards. This was definitely not your uncle’s ZZ Top—the guys they imagined as blues-bustin’ rodeo escapees, chugging around the dusty back roads of Texas’ roadhouse circuit, soaked in mescal, tuned in to border radio, and exhaling barbeque smoke. AFTERBURNER presented ZZ Top as dystopian blade runners, ascending to the sterile environs of their space compound instead of running around the desert killin’ varmints.

They still manage to rock, though; they come out swinging with “Sleeping Bag,” which has enough Billy Gibbons attitude to compensate for the fact that there are more artificial sounds on the track than on any given Depeche Mode record, perhaps on all given Depeche Mode records. If Frank Beard were even in attendance at the session that produced this song, many would be surprised—the drums were absolutely played by robots. But in the song, Gibbons gives us a great new metaphor for getting it on, and his guitar solo at the song’s conclusion reminds us what a bad man he can be on the axe of his choice.

That guitar comes to back to slay in the ballad “Rough Boy,” a virtual rewrite of EL LOCO’s “Leila” that to this day remains anathema to most old-school ZZ Top fans. Yes, the song has a pulse generated by Korg and spooky keys approved by NASA itself, and Gibbons’ singing is hushed and vulnerable throughout. But his two guitar solos add some melt-yo’-backside Texas blues to the soothing calm of the synth bed on which those solos rest. Yes, this is Gibbons dialed back to maybe 6 or 7, but it’s more than enough to lift the song out of its digitized slumber.

And who could forget “Velcro Fly?” A new metaphor for sex disguised as a paean to the latest dance fad, “Velcro Fly” features what sound like actual live drums (mixed in with the drum machines) and two short bass solos, incorporated into yet another keyboard-forward track. There are other highlights—”Woke Up with Wood” (yes, it means what you think it means), the Dusty Baker-sung “Delirious” and others—that make AFTERBURNER worth another listen, after all these years.