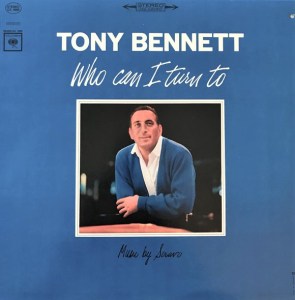 Like so many others you may have read about on the site, the right amount of Tubey Magic — and by that we mean a very healthy amount — makes all the difference.

What We’re Listening For On Who Can I Turn To

I’ve Never Seen
Between The Devil And The Deep Blue Sea
Listen, Little Girl
Got The Gate On The Golden Gate
Waltz For Debby
The Best Thing To Be Is A Person

Tony Bennett returned to the Top 40 in late 1964 with his version of the Leslie Bricusse-Anthony Newley anthem “Who Can I Turn To (When Nobody Needs Me),” from Newley’s Broadway show The Roar Of The Greasepaint, The Smell Of The Crowd. That song, like the rest of this album, was arranged and conducted by George Siravo, who made detailed ballad arrangements, using individual instruments and groups to echo and counterpoint the Bennett vocals. Still searching for new material, and finding it in works by Cy Coleman and Carolyn Leigh, as well as Mel Torme (whose “Got The Gate On The Golden Gate” recalled Bennett’s musical connection to San Francisco), Bennett didn’t discover anything to match the title track, and he re-recorded “Autumn Leaves” in a more uptempo framework. But the match of singer and arranger made for a consistent and effective album.