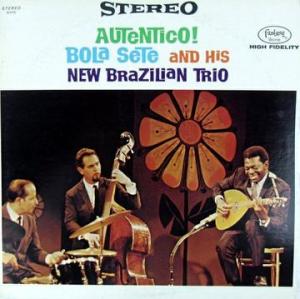 This vintage Fantasy pressing has the kind of Tubey Magical Midrange that modern records rarely even BEGIN to reproduce. Folks, that sound is gone and it sure isn’t showing signs of coming back. If you love hearing INTO a recording, actually being able to “see” the performers, and feeling as if you are sitting in the studio with the trio, this is the record for you. It’s what vintage all analog recordings are known for — this sound.

What the best sides of Autentico! have to offer is not hard to hear:

What We’re Listening For on Autentico!

With the solid classical technique of Sete leading the way, this is a gently swinging set of mostly low-key Brazilian jazz (with a few livelier exceptions), as played by Sete’s New Brazilian Trio. Like several Brazilian guitarists of the period, Sete is not a jazz player per se, following the contours of the rhythms with classical flourishes, sometimes, as in the case of Baden Powell’s “Consolacao,” turning out lengthy, ritual-like incantations on one chord.

The drummer simply known as Paulinho makes a versatile showing in all kinds of related rhythms; “Baion Blues” actually finds him simulating a rock & roll beat, perhaps a harbinger of tropicalismo developments to come in Brazil. Sebastiao Neto, on his way to fame in Sergio Mendes’ bands, provides a hypnotic bass presence.