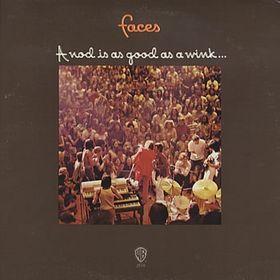 Vintage covers for this album are hard to find in clean shape. Most will have at least some ringwear, seam wear and edge wear. We guarantee that the cover we supply with this Hot Stamper is at least VG, and it will probably be VG+. If you are picky about your covers please let us know in advance so that we can be sure we have a nice cover for you.

If you like your hard rock dirty and bluesy, you can’t do much better than this album! Most copies just don’t do it justice, but this one really hits the nail on the head. For this kind of music, you just can’t do much better than these guys. The Stones at their best may have had them beat, but it’s a photo finish to say the least. With Glyn Johns at the console, the Faces behind the instruments, and the Better Records Hot Stamper seal of approval on this copy, you can be sure that this is one rockin’ record. And make sure you turn it up good and loud the way The Faces intended.

This vintage WB pressing has the kind of Tubey Magical Midrange that modern records can barely BEGIN to reproduce. Folks, that sound is gone and it sure isn’t showing signs of coming back. If you love hearing INTO a recording, actually being able to “see” the performers, and feeling as if you are sitting in the studio with the band, this is the record for you. It’s what vintage all analog recordings are known for — this sound.

Glyn Johns At The Helm

This album was produced by one of our very favorite engineers around here, Mr. Glyn Johns, the man behind tons of Better Records faves — Sticky Fingers, The Eagles’ 1st, Joan Armatrading’s self-titled, Who’s Next, and many, many more.

But no Faces album — Glyn Johns-produced or not — will ever have Demo Disc Sound. It’s just not what the band was going for. The proper sound for a band like this is RAW AND ROCKIN.’ Any phony EQ or overproduction would really make a mess of what the band does here, which put simply is kickin’ out the jams. It would be fair to call these guys a bar band, but they’re the best darn bar band I’ve ever heard!

The best Faces pressings have amazing live-in-the-studio sound that completely conveys the power of one of the hardest rockin’ bands of all time. What more can you ask for?

Debris
Memphis
Too Bad
That’s All You Need

The Faces’ third album, A Nod Is as Good as a Wink…to a Blind Horse, finally gave the group their long-awaited hit single in “Stay with Me,” helping send the album into the Billboard Top Ten…

[It’s] the tightest record the band ever made. Granted that may be a relative term, since sloppiness is at the heart of the band, but this doesn’t feel cobbled together (which the otherwise excellent Long Player did) and it serves up tremendous song after tremendous song, starting with the mean, propulsive “Miss Judy’s Farm” and ending with the rampaging good times of “That’s All You Need.”

In between, Ronnie Lane serves up dirty jokes (the exquisitely funny “You’re So Rude”) and heartbreaking ballads (the absolutely beautiful “Debris”), the band reworks a classic as their own (Chuck Berry’s “Memphis”) and generally serves up a nonstop party. There are few records that feel like a never-ending party like A Nod — the slow moments are for slow dancing, and as soon as it’s over, it’s hard not to want to do it all over again.

It’s another classic — and when you consider that the band also had Long Player to their credit and had their hands all over Every Picture in 1971, it’s hard to imagine another band or singer having a year more extraordinary as this.