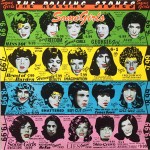 Reviews and Commentaries for Some Girls

One of our good customers had this to say about some Hot Stampers he purchased a while back:

I have recently purchased from you great copies of Aftermath, Beggars Banquet and Sticky Fingers, so I think is have some idea of how Stones records should sound when they are great. This copy of SOME GIRLS is virtually unlistenable. It is harsh, hard-sound, unmusical. It is a raucous chaos of undigestible noise. I don’t know if you personally play graded it, but someone in your group seriously missed the boat. I am returning it.

I played that Triple Plus Shootout Winning copy myself. I like to think I know the album well, and I had never heard it sound so good in my life. It was really quite shocking to hear it sound open and free from distortion, literally for the first time. Obviously we were hearing it differently.

But it is a very different recording from the three Stones albums you mention.

This entry from Wikipedia may be helpful for those trying to better understand the sound that Chris Kimsey and the Stones wanted this time around.

Writing and Recording Some Girls

Kimsey’s direct method of recording, together with the entrance of the then state-of-the-art Mesa/Boogie Mark I amps instead of the Ampeg SVT line of amps, yielded a bright, direct and aggressive guitar sound.

The record is supposed to sound the way our copy sounded — when played back on our system anyway. I can’t know what it sounds like on yours. (Which is why it’s never a problem to get a refund any time you have an issue with one of our records.)

How do we know what Some Girls is supposed to sound like? The most obvious answer is that we’ve played them by the score, probably a hundred copies or more by now. We’ve learned to recognize what the best copies do well that the average ones do not do as well.

Some Girls and Some Stereos

Which brings up a fundamental tenet of audio in the home, which can be summarized in one sentence:

Some stereos do a better job of playing problematical recordings than other stereos do.

I too struggled with Some Girls back in the day. In the Nineties I might have agreed with the writer about the sound. But I worked very hard on my stereo and room for the next twenty plus years. I made a lot of improvements and solved a lot of problems, something the writer apparently has not done to the degree necessary to get the record to sound the way it should.

We write about the subject in a commentary entitled: Our System Just Loves Certain Records. An excerpt:

We have put literally thousands of hours into our system and room in order to extract the maximum amount of information, musical and otherwise, from the records we play, or as close to the maximum as we can manage. Ours is as big and open as any system in an 18 by 20 by 8 room I’ve ever heard. [We have since moved into a bigger studio, which has noticeably improved sonics compared to our old one.]

It’s also as free from colorations of any kind as we can possibly make it. We want to hear the record in its naked form; not the way we want it to sound, but the way it actually does sound. That way, when you get it home and play it yourself, it should sound very much as we described it.

We are convinced that the more time and energy you’ve put into your stereo over the years, decades even, the more likely it is that you will hear this wonderful record the way we heard it. And that will make it one helluva Demo Disc in your home too.

In our current listings for Some Girls we put in this disclaimer:

This recording also ranks high on our Difficulty of Reproduction Scale. Do not attempt to play it using any but the best equipment.

Aftermath, Beggars Banquet and Sticky Fingers are much easier recordings to reproduce. They never get returned. Our  customers can play them just fine.

Cognitive Dissonance Again? We’re Back to That Now?

What Some Girls is trying to tell this person is that he needs to make changes to his system, or get a different one. This of course will never happen. Blaming the record is the easiest way to avoid the cognitive dissonance that would be the result of thinking you have a good stereo but hearing bad sound on a record.

Famously, some numbskull mastering engineers attempt to solve the problem of gritty, grainy records by rolling off all the highs.

Here is a classic example of taking the wrong approach when dealing with a famously problematical record.

I assure you I could list a great many more.. But you get the picture.

*The record in question is John Wesley Harding. I will be relisting it some day accompanied by an even sterner warning that only the best stereos with the most highly tweaked and most capable front ends can play this record. After the record was returned to us, twice, we played it again and it sounded right. Not great, not Demo Disc quality, but right, like other Dylan records from the period. And certainly not distorted in any way.