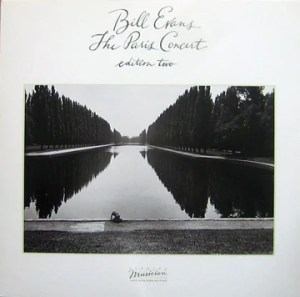 This original Elektra pressing has the kind of Tubey Magical Midrange that modern records can barely BEGIN to reproduce. Folks, that sound is gone and it sure isn’t showing signs of coming back. If you love hearing INTO a recording, actually being able to “see” the performers, and feeling as if you are sitting in the studio with the band, this is the record for you. It’s what vintage all analog recordings are known for — this sound.

What the Best Sides of The Paris Concert, Edition Two Have to Offer Is Not Hard to Hear

What We’re Listening For on The Paris Concert, Edition Two

Re: Person I Knew
Gary’s Theme
Letter to Evan
34 Skidoo

Bill Evans’ death in 1980 ended the career of the most influential (along with McCoy Tyner) acoustic pianist in jazz of the previous 20 years. This second of two LPs features Evans, bassist Marc Johnson, and drummer Joe La Barbera closely interacting on four of the pianist’s originals, Gary McFarland’s “Gary’s Theme” and Miles Davis’ “Nardis.”

The music is sensitive and subtly exciting. Until the release of some later live sessions from 1980, this could be considered Bill Evans’ final recording and serves as evidence that, rather than declining, he was showing a renewed vitality and enthusiasm in his last year.