We sold this copy last night (10/10), immediately after one had sold in an auction on ebay for $787, a price almost two hundred dollars more than what we were asking. Note that our copy was cleaned and auditioned and found to be both phenomenally good sounding and reasonably quiet. None of these things could be said of the record on ebay of course, but apparently the word is out that this is an amazing recording and the bidding reflected that fact. I have never seen one go for anything like this kind of dough. Now that they do — there were four bidders about $550 — you should not expect to see a Hot Stamper pressing of the album show up on our site again unless we get very lucky locally, and that is highly unlikely. 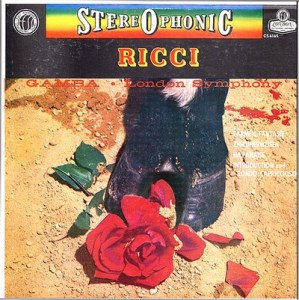 Ricci’s playing of the Bizet-Sarasate Carmen Fantasie is OUT OF THIS WORLD. There is no greater performance on record in my opinion, and few works that have as much Audiophile Appeal.

When you play a copy of this record and hear a smeared, veiled violin, don’t be too surprised. This is not the least bit unusual, in fact it’s pretty much par for the course. The soundstage may be huge: spacious and 3-D; it is on most copies. But what good is a record of violin showpieces if the violin doesn’t sound right?

These two sides can show you how good the violin — and the whole orchestra — can sound. They’re tonally correct from top to bottom, transparent and sweet. The texture on the strings is PERFECTION.

These pieces are less about the “violin-in-your-lap” effect and more about the violin as an integrated member of the orchestra.

Of all the copies we have ever played, these sides had the most of a quality that goes a long way in the world of classical music. As we went through the various copies, we noticed that the sound on the best sides was especially RELAXED. (Compare that to the typical Classic Records heavy vinyl pressing, which, on the relaxation scale of one to ten, rates a lot closer to one than it does to ten. Between one and two probably.)

Once you spot the relaxed copies, you find they tend to do every other thing well, and that’s what it takes to win shootouts — doing everything well.

What We’re Listening For on the Carmen – Fantaisie