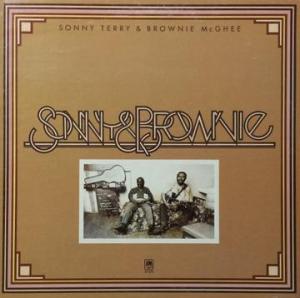 This is easily one of better Folkie Blues albums to hit our table in a while. The music is SUPERB. Among the highlights are great covers of Curtis Mayfield’s “People Get Ready” and Randy Newman’s “Sail Away.”

This vintage A&M pressing has the kind of Tubey Magical Midrange that modern records rarely even BEGIN to reproduce. Folks, that sound is gone and it sure isn’t showing signs of coming back. If you love hearing INTO a recording, actually being able to “see” the performers, and feeling as if you are sitting in the studio with this duo, this is the record for you. It’s what vintage all analog recordings are known for — this sound.

What We’re Listening For on Sonny and Brownie

In a way, this is the veteran duo’s version of Fathers and Sons, a meeting of old black bluesmen with young white admirers that Muddy Waters and Otis Spann cut with Mike Bloomfield and Paul Butterfield. John Mayall and John Hammond, Jr. are among the “youngsters” on this powerful statement that includes a definitive version of Randy Newman’s wickedly subtle anti-slavery tune “Sail Away.” Sonny Terry’s trademark whoops are energizing. The repartee between him and Brownie McGhee might convince you they were fast friends if you didn’t know otherwise.