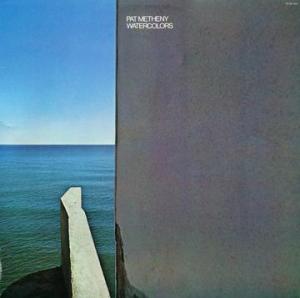 This vintage ECM pressing has the kind of Tubey Magical Midrange that modern records can barely BEGIN to reproduce. Folks, that sound is gone and it sure isn’t showing signs of coming back. If you love hearing INTO a recording, actually being able to “see” the performers, and feeling as if you are sitting in the studio with the band, this is the record for you. It’s what vintage all analog recordings are known for —this sound.

What We’re Listening For on Watercolors

Pat Metheny emerges on his second album, Watercolors, as an ECM impressionist, generally conforming to the label’s overall sound while still asserting his own personality. As the title suggests, there are several mood pieces here that are suspended in the air without rhythmic underpinning, a harbinger for the new age invasion still in the future.

Metheny’s softly focused, asymmetrical guitar style, with echoes of apparent influences as disparate as Jim Hall, George Benson, Jerry Garcia, and various country guitarists, is quite distinctive even at this early juncture. Metheny’s long-running partnership with keyboardist Lyle Mays also begins here, with Mays mostly on acoustic piano but also providing a few mild synthesizer washes. Danny Gottlieb is on drums, and ECM regular Eberhard Weber handles the bass. This is essentially the first album by the Pat Metheny Group per se, although the band had yet to find its direction in this somewhat diffuse showing.