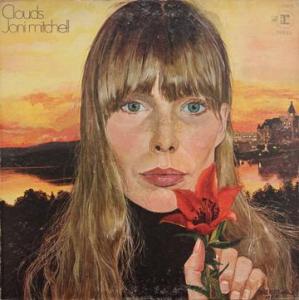 Everything you could ask for from this album is here on this copy: stunning clarity and transparency, breathy vocals, richness, sweetness, warmth, and tons of ambience.

Check out the clear transients on the acoustic guitar — you can really hear her moving her hands around the fretboard and pulling on the strings. The immediacy is mindblowing — Joni and her guitar are right there in the room with you, without being forced into your lap.

The best sounding copies of Clouds are the ones that put Joni and her guitar right there in your living room. The copies with veiled vocals really don’t allow the music to come to life, and the copies where her voice is too forward come across as unnatural and hi-fi-ish. It takes an exceptional copy to strike the right balance and put both the voice and guitar right between your speakers, not under a blanket or in your lap.

The intimacy of the recording is simply breathtaking, but most pressings can’t begin to do it justice. This is especially true of the reissues, which tend to be thin, edgy and sorely lacking in Tubey Magic. You have not begun to hear these songs with this kind of realism and power unless, like us, you’ve cleaned and played plenty of copies and lucked into a truly killer Hot Stamper.

We needed to find the right cleaning technologies to get Clouds to sound right, just as in the case of Blue and Ladies Of The Canyon. Our best copies got much quieter after applying some of our newer cleaning techniques, and the sound became even warmer, richer, sweeter and more transparent.

In 2005 we tried to explain why it is practically impossible to find good sounding copies of Blue, and those comments apply equally well to Clouds:

The main reason it’s so difficult to find a good sounding pressing of this record is that most copies have a tendency towards hardness, shrillness and aggressiveness. There is a great deal of mid to high frequency information in this recording, and the problems arise when you take all that energy and try to stamp it into a piece of mass-produced cheap domestic vinyl. If the vinyl wasn’t good on the day they pressed the record, it doesn’t matter how good the mastering is. The result is grain. Grunge. And since Joni pushes hard in her upper registers on many of these songs, it’s enough to make you leave the room.

The best copies bring out the breathy quality to Joni’s voice, and she never sounds strained. They are sweet and open, with good bass foundation and transparency throughout the frequency range.

What We’re Listening For on Clouds

Clouds is a stark stunner, a great leap forward for Joni Mitchell. Vocals here are more forthright and assured than on her debut and exhibit a remarkable level of subtle expressiveness. Guitar alone is used in accompaniment, and the variety of playing approaches and sounds gotten here is most impressive.

“The Fiddle and the Drum,” a protest song that imaginatively compares the Vietnam-era warmongering U.S. government to a bitter friend, dispenses with instrumental accompaniment altogether. The sketches presented of lovers by turns depressive (“Tin Angel”), roguish (“That Song About the Midway”), and faithless (“The Gallery”) are vividly memorable. Forthright lyrics about the unsureness of new love (“I Don’t Know Where I Stand”), misuse of the occult (“Roses Blue”), and mental illness (“I Think I Understand”) are very striking.

Mitchell’s classic singer/songwriter standards “Chelsea Morning” and “Both Sides Now” respectively receive energetically vibrant and warmly thoughtful performances. Imaginatively unusual and subtle harmonies abound here, never more so in her body of work than on the remarkable “Songs to Aging Children Come,” which sets floridly impressionistic lyrics to a lovely tune that is supported by perhaps the most remarkably sophisticated chord sequence in all of pop music. Mitchell’s riveting self-portrait on the album’s cover is a further asset.

This essential release is a must-listen.