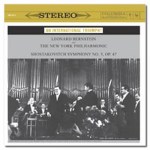 This Cisco 180 gram LP has EXCELLENT SOUND. Without a doubt this pressing is a HUGE improvement over the majority of shrill originals. Robert Pincus, Mr. Record himself, loaned me his best original Columbia pressing for the shootout. Not surprisingly it sounded every bit as hard, shrill and aggressive as others I have heard. Sounds lovely in the quiet passages, but you better cover your ears in the tuttis.

That’s why you see so few Columbia classical LPs on our site; the sound is usually terrible, and almost always in the same way: boosted upper midrange/ lower highs.

These records no doubt sounded great on the consoles of the day, with speakers aimed at your knees, but on modern hi-fi rigs they are positively deadly.

The aforementioned Mr. Record was also kind enough to provide us with an acetate of the very same recording, one which was cut a bit too loud and couldn’t be used. It sounded very much like our test pressing — warm, rich, and natural, with not a hint of phony sound from top to bottom. It was, however, a bit more textured, spacious and resolving of detail, exactly what you would expect. That said, the finished record has more than enough of all the best qualities we look for in a classical LP, especially that rare quality of Right On The Money Tonality. The string tone is superb. Not many modern remasterings can make that claim. Very few in fact.

This wonderful music belongs in any serious collection. Now that the sound matches the performance, it can be yours, on quiet vinyl no less.

This one gets a Top Recommendation from Better Records as one of the few heavy vinyl pressings that can actually beat some if not most of the originals.

We can’t be sure we would still agree with any of this but I’m guessing the Cisco pressing is still a good sounding record at the price.

A final note of honesty. Even as recently as the early 2000s we were still somewhat impressed (and even very impressed in some cases) with many of the better Heavy Vinyl pressings. If we had never made the progress we’ve worked so hard to make over the course of the last twenty plus years perhaps we would find more merit in the Heavy Vinyl reissues so many audiophiles seem to prefer.