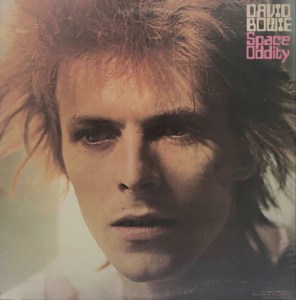 One of the reasons the song “Space Oddity” sounds so amazing is that it was produced by none other than Gus Dudgeon, the man behind all the best Elton John records. It has Paul Buckmaster doing the string arrangements as well. His work on Elton’s self-titled album is awe-inspiring; we know of none better.

What We’re Listening For on Space Oddity

Originally released as Man of Words/Man of Music, Space Oddity was David Bowie”s first successful reinvention of himself. Abandoning both the mod and Anthony Newley fascinations that marked his earlier recordings, Bowie delves into a lightly psychedelic folk-rock, exemplified by the album’s soaring title track…

Still one of David Bowie’s best-known songs, “Space Oddity” was a largely acoustic number augmented by the eerie tones of the composer’s Stylophone, a pocket electronic organ. The title and subject matter were inspired by Stanley Kubrick’s 2001: A Space Odyssey and introduced the character of Major Tom. Some commentators have also seen the song as a metaphor for heroin use, citing the opening countdown as analogous to the drug’s passage down the needle prior to the euphoric ‘hit’, and noting Bowie’s admission of a “silly flirtation with smack” in 1968. His 1980 hit “Ashes to Ashes” declared “We know Major Tom’s a junkie”.

“Cygnet Committee” has been called Bowie’s “first true masterpiece”. Commonly regarded as the album track most indicative of the composer’s future direction, its lead character is a messianic figure “who breaks down barriers for his younger followers, but finds that he has only provided them with the means to reject and destroy him”. Bowie himself described it at the time as a put down of hippies who seemed ready to follow any charismatic leader. Another track cited as foreshadowing themes to which Bowie would return in 1970s, in this case the fracturing of personality, was “Janine”, which featured the words “But if you took an axe to me, you’d kill another man not me at all”.

The Buddhism-influenced “Wild Eyed Boy from Freecloud” was presented in a heavily expanded form compared to the original guitar-and-cello version on the B-side of the “Space Oddity” single; the album cut featured a 50-piece orchestra and was also notable for Mick Ronson’s debut on a Bowie record, playing uncredited guitar and handclaps midway through the song. “Memory of a Free Festival” was Bowie’s reminiscence of an arts festival he had organised in August 1969. Its drawn-out fade/chorus (“The Sun Machine is coming down / And we’re gonna have a party”) was compared to The Beatles’ “Hey Jude”; the song has also been interpreted as a derisive comment on the counterculture it was ostensibly celebrating. The background vocals for the crowd finale featured Bob Harris, his wife Sue, Tony Woollcott and Marc Bolan among other people. In 1970 Bowie cut the tune in half for the A- and B-sides of a more rock-oriented version featuring the band that would accompany him on The Man Who Sold the World later that year: Mick Ronson, Tony Visconti and Mick Woodmansey – an embryonic form of Ziggy Stardust’s Spiders From Mars.