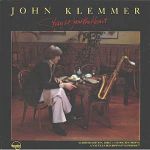 More of the Music of John Klemmer

Presenting another entry in our extensive Listening in Depth series with advice on what to listen for as you critically evaluate your copy of Straight from the Heart. Here are more albums currently on our site with similar Track by Track breakdowns.

The best copies give you dynamics and immediacy like you have rarely heard outside of the live event.

Hell, this record IS live; it’s live in the studio. It’s a direct to disc recording, what else could it be?

There is simply nothing getting in the way of the music. If you have the system for it, you can recreate the live sound of this session in a way that few other recordings allow you to do.

This copy had one quality not heard on most of the others: Tubey Magic. The sound is rich and full-bodied, practically free of grit and grain – this is the kind of sound one hears occasionally on the best tube equipment and practically nowhere else. Of course this is an all-transistor affair, but tubey sound is what ended up on the record, so go figure.

The same was true of the amazing bass work by Bob Magnusson. He can easily get lost if the pressing is nothing special. With a Hot Copy like this one, everyone is right there.

This is actually the only real jazz record that I have ever heard by John Klemmer. He improvises beautifully, in a true jazz way, throughout the album, just as if he were fronting a real live jazz quartet. Because this session was recorded Direct to Disc, everyone had to be “in the moment”, just like real jazz musicians are. Perhaps that’s where he’s finding the inspiration for the way he plays here.

I love the album Touch, especially the MOFI pressing of it (with the right stampers don’t you know), which is one of the high watermarks for that label. For romantic jazz there is nothing better. But if you want something with more energy, this album should do the trick.

By the way, do you know what these two very different records from two very different labels have in common? They were both mastered by Stan Ricker! (Note that we are not big fans of his half-speed mastering approach for MoFi and other labels. Obviously this is a real-time mastered session; here Ricker acquits himself admirably in all respects. The sound simply cannot be faulted.)

So the day came when we had all our copies in hand, Disc Doctored and ready to play. While working through the four side ones it became clear from the outset that, although this is a potentially amazing recording, some pressings had far better sound than others. The Direct to Disc recording approach eliminates one variable in the making of records: the quality of the tape used to master the finished product. There is no tape, therefore no question as to which is the True Master.

But in this case there is more than one performance. A special edition pressing, (limited to 50!) autographed by John Klemmer himself, and adorned with a numbered (in this case #31) gold sticker, was made for “Take 2” of this music. Having listened to both takes, I can hardly tell one from the other. I’m sure the players felt the first one was better in some way, but they’re musicians and no doubt sensitive to subtleties we non-musicians are unable to appreciate, certainly not to the same degree anyway.

This Is Where the Story Gets Good

So we have two takes to choose from on side one, one of which is marked Take 2 right in the dead wax. Imagine my surprise when, after the shootout was done, I found a regular copy with a Take 2 side one. Even more shocking, it was the one that rated the worst for sound on that side, a solid A. So the two Take 2’s, identically mastered, have both the best sound and the worst sound for side one. Now that’s pretty darn amazing if you ask me.

None of this should be the least bit surprising to us here at Better Records, or you for that matter if you’ve been reading the site for any time at all. We can’t find any two records that sound the same, no matter how they’re made. Eliminating the tape eliminates one variable, but there are still plenty left, as evidenced by this direct to disc and no doubt dozens more.

Wow! On the best copies the opening sax solo for this song will BLOW YOUR MIND! This is Demo Disc Sound and then some.

This track opens with a super-transparent solo guitar to rival anything found on the great L.A. 4 direct to disc recordings. This means that the surfaces will be problematical on even the best copies, as there is nothing to for the vinyl to hide behind.

The fret buzz is a bit much, but fun I suppose. On the better copies, listen for the guitarist’s subtle breathing. It’s hard to hear on most copies, but it’s definitely there.

Klemmer really pours his heart into this one. I had never really appreciated how good his performance of this old warhorse is until this shootout. It’s not surprising; Klemmer is one of the most emotionally powerful sax players I’ve ever had the pleasure to hear.