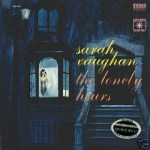 More of the Music of Sarah Vaughan

Classic Records remastered this album back in the day, and I can see why: the average pressing on Roulette is borderline unlistenable.

Of course we didn’t know that when we started this shootout. We had found a nice sounding copy and subsequently went on the hunt for more. Little did we know how wide the variation in sound quality we would find on the original Orange Label pressings.

There was simply no denying that many of the copies we played were just too thin, shrill and pinched in the midrange to be of any interest to our audiophile customers.

As mediocre as Bernie’s Classic cutting may be, it’s still better than the average Roulette original one might throw on the turntable.

And you can forget the monos completely; they were by far the worst sounding of them all.

Fellow jazz singer Mel Tormé said that Vaughan had “…the single best vocal instrument of any singer working in the popular field.” Her ability was envied by Frank Sinatra who said that “Sassy is so good now that when I listen to her I want to cut my wrists with a dull razor.” The New York Times critic John S. Wilson said in 1957 that Vaughan possessed “what may well be the finest voice ever applied to jazz.”

Vaughan’s vibrato was described as “an ornament of uniquely flexible size, shape and duration,” a vibrato also described as “voluptuous” and “heavy.” Vaughan was also accomplished in her ability to “fray” or “bend” notes at the extremities of her vocal range. It was noted in a 1972 performance of Leslie Bricusse and Lionel Bart’s “Where Is Love?” that “In mid-tune she began twisting the song, swinging from the incredible cello tones of her bottom register, skyrocketing to the wispy pianissimos of her top.”

Look For Me, I’ll Be Around
What’ll I Do
Solitude
These Foolish Things Remind Me Of You
The Man I Love
So Long, My Love

The Lonely Hours, Sarah Vaughan’s contribution to the genre of saloon song LPs, doesn’t have a stellar selection of material — although of course nearly anything recorded by one of America’s foremost jazz interpreters is worth hearing.

Add to that the special treat of Benny Carter — the seminal altoist who’d been contributing charts to the hottest big bands since 1928 — occupying the arranger’s chair, and The Lonely Hours becomes a very intriguing proposition. Carter’s refined arrangements and ensemble playing don’t exactly reinforce the isolation of the title, but Vaughan sounds excellent on “I’ll Never Be the Same,” “These Foolish Things,” and “If I Had You,” lightly caressing the notes.

For “You’re Driving Me Crazy” and “What’ll I Do,” she cleverly mirrors the comic frustration embodied in Carter’s flügelhorn/tuba ensemble.

The Lonely Hours is a solid match of vocalist and arranger in most respects, with only the quality of the material weighing it down slightly.