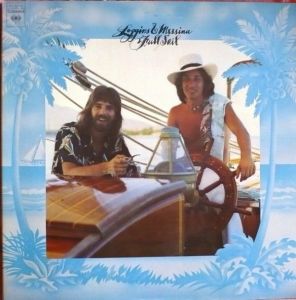 Practically all copies have a midrange equalization problem, with a lack of lower mids and boosted upper mids, which often thins out the vocals and leads to hardness and honkiness.

The better copies manage to keep the EQ anomalies within bounds while giving us full-bodied pianos; rich, lively vocals, full of presence and brimming with enthusiasm; harmonically-rich guitars, and a three-dimensional soundstage that reveals the space around them all.

A++. This side is big and rich yet still very clean and clear with lovely breathy vocals.

A++ to A+++. Just shy of White Hot, this side is clean, clear and super high-rez with wonderfully breathy vocals, deep punchy bass and great energy.

The big chorus in Watching the River Run about two minutes in is also a great test for weight, resolution, dynamic energy, and freedom from strain in the loud parts. When the whole band is projecting, the shortcomings of practically any copy will be most evident. It was a key test every pressing had to pass.

When the music gets loud you want it to get better, with more size, energy and, especially, emotional power, just they way it would be heard in concert. Any strain or congestion in the choruses results in the loss of serious points. (This is of course one of the biggest issues we have with Heavy Vinyl — it never gets up and going the way real records do. “Boring” is the adjective we most commonly use to critique the few we hear, and who wants to listen to boring records?)

On Full Sail the more versatile members of the band played a wide variety of instruments. (Michael Omartian as you probably know is not a member of the band but rather a top session guy and producer. In one year alone he was nominated for ten Grammy Awards, winning three.)

Most copies suffered from noisy edges. In general Mint Minus to Mint Minus Minus was about as quiet a copy as we could find.

This is every inch a follow-up to Loggins & Messina, including a ’50s rock & roll pastiche in the style of “Your Mama Don’t Dance” called “My Music” that hit number 16 as a single. Other notable material included Jim Messina’s island-rock anthem “Lahaina” and one of Kenny Loggins’ sensitive but generic ballads, typically called “A Love Song.” But then, the charm of L&M was that they could get away with something this sappy. Balance is the key to L&M albums, and it’s the chief talent (among many) that producer Messina brings to them. Here, as on L&M’s first two albums, he achieves a musical flow that’s exhilarating …

The elements that make up a good sounding Loggins and Messina album can be found, to varying degrees, on all the Hot Stamper pressings we offer. Permit us to break them down for you. (We’ve borrowed heavily from ourselves here so if this material looks familiar don’t be surprised, we’ve used it before.)

Absolutely critical to this record. Most copies of this album have no extreme highs, which causes the percussion and guitar harmonics to be blunted and dull. Without extreme highs the percussion can’t extend up and away from the other elements in the mix. Consequently these elements end up fighting for space in the midrange and getting lost in the dense mixes that Jim Messina favors (and some of us audiophiles love).

Equally critical. So many copies are veiled in the midrange, partly because they may have shortcomings up top, but also because they suffer from blurry, smeary mids and upper mids. With so many stringed instruments; horns and woodwinds (oboe, saxes, flute, recorder); as well as plenty of percussion elements in the mix for practically every song, dull, dead sounding L & M pressings can’t begin to communicate the musical values in their superb recordings. It won’t be long until boredom sets in.

Although this quality is related to the above two, it’s not as important overall as the one below, but it sure is nice to have. When you can really “see” into the mix, it’s much easier to pick out each and every brass and wind instrument, and hear all the effects on the guitars, in order to gain more insight into the arrangement and the recording of the material.

Seeing into the mix is a way of seeing into the mind of the artist. To hear the hottest copies was to appreciate even more the talents of all the musicians and producers involved, not to mention the recording engineers.