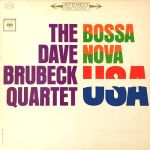 Who knew? Not us and not anybody else it seems. We are not aware that any of the audiophile cognoscenti have ever taken this recording seriously, but that just goes to show how uninformed — or perhaps more likely underinformed — they’ve always been.

Gems such as this sit undiscovered even after thousands of pages of audiophile record reviews have been written. Then, along come a handful of guys in Thousand Oaks, California many years later, 52 to be exact, and reveal to the world a heretofore all but unknown yet nonetheless amazing Brubeck record.

And they back up everything they say with actual records that sound as good as they say they will.

But wait just a minute. We sold an early pressing ourselves back in 2010 for $30 as a “nice sounding” record, nothing more, so who are we to talk?

Which simply goes to show that the decade we spent perfecting the Record Shootout has finally paid off for Bossa Nova U.S.A. Now we can clean them better, play them better, hear them better, and, with a big stack to work with, find one that sounds as good as this one does.